POND ISLAND–A 326-room hotel with a showroom and 450 executive apartments will be constructed on the Belair beachfront by a Chinese public-private venture. Plans for the “Pearl of China” project have already approved by Government and the ground-breaking for the project is slated for September 17, and should take some two years to complete.

This multi-million dollar project, for which the Chinese bought the land that was for the shelved Barbaron development, was announced by Finance Minister Richard Gibson Sr. at a town hall session held in University of St. Martin (USM). “We have struck the jackpot,” the minister said, adding that the Chinese have promised to generate at least one million Chinese tourists annually to the country.The project is the culmination of months of negotiations led by Gibson Sr. and Prime Minister William Marlin with the Chinese Government and private sector representatives.
Marlin said one of the interesting moments in the negotiation was the Chinese did not speak English and their representative on St. Maarten is a Turkish man who did not speak Chinese. He commended Gibson Sr. for his hard work in the past months in getting things moving for the country. 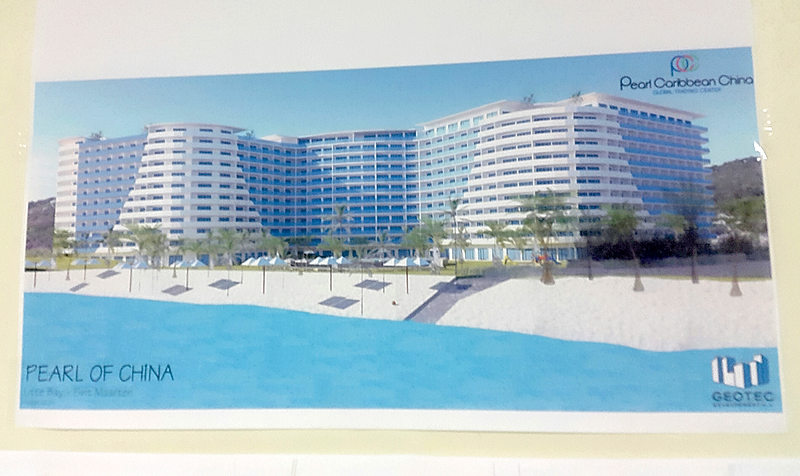 A company reflecting 50 per cent share ownership of the Chinese Government and 50 per cent by the Chinese private sector companies has been established in St. Maarten. Some US $60 million has already been transferred into the company, according Gibson Sr.
Former Lt. Governor Franklyn Richards warned Government in the town hall question segment to make sure the transfer of money had been properly regulated by the Central Bank of Curaçao and St. Maarten.The 450 apartments will be bought by Chinese private sector companies for their executives and staff who will transact business from St. Maarten.
This along with the showroom will make St. Maarten “a hub and centre” for Chinese commercial activities in the region, according to Gibson Sr.The Chinese have pledged as “a gift” to St. Maarten “to find a water source” to boost agriculture, said Gibson Sr. The Chinese Government also plans to work with Government on cheaper electricity options and to reduce dependence on fossil fuels. Further, Gibson Sr. added that the Chinese Government will help to create “an eco-city” here.
A 30-member delegation comprising Chinese Government and private sector officials from mainland China, Singapore Malaysia and Canada will be here for the ground-breaking.
Like Richards, other audience members voiced their worry about a Chinese takeover of the country and what they saw as Government’s disregard of local projects and entrepreneurs. One young woman asked the minister what was the guarantee that she and other young people will have a place in this project and whether she would be living under Chinese rule.Traffic congestion was also raised by some audience members who pointed out how bad the situation is now and the worry about the impact of one million stay-over Chinese visitors year.Another attendee said the country needs to be prepared for the Chinese tourists, their habits and behaviour. He also warned about the Chinese doing all the business themselves and not involving locals from the construction phase to the management.
Emilio Kalmera, who has a financial background, questioned how this project will correct the inequality that exists in the country.

He added that inequality can only be solved by local people becoming shareholders.
To that the Minister said the Chinese are not going to give away their company and if shares are offered those will come at a price. “I want to tell you there is no Santa Claus.”
St. Maarten needs “to be weaned off of its isolation” from the outside world if it wants to see increased economic growth, said Gibson Sr. at the session entitled “Inequality and Demand.” The country’s economy has been in “a holding pattern for years” that has manifested itself in stagnant growth over the years.

Globalisation has done nothing for St. Maarten or others in the Caribbean, because there are no factories or multi-national companies, he noted. Multi-nationals such as Amazon.com “threaten the job market and economy” when people opt to purchase overseas via the Internet.

St. Maarten is a not party to international trade agreements and even if the country was it had nothing to trade, said the Minister. To counter this, he said focus needs to be placed on bettering the country’s tourism product “to make it second to none.
“New, innovative and effective ways,” need to be found to sustain the economy and to create jobs, he stated.