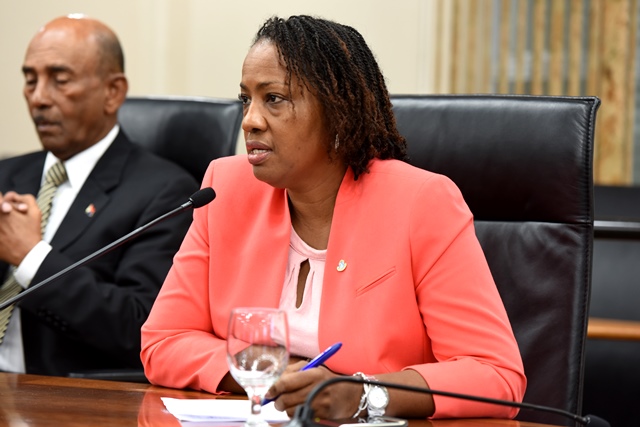 PHILIPSBURG – The school year has opened with a number of challenges, according to Education Minister Silveria Jacobs.

Minister Jacobs noted that the classroom constraints at the St. Maarten Vocational School still exists due to renovation work still ongoing at the school. “The situation with the vocational schools, four classrooms not being ready have also added to the problem, but in my last discussion with the Ministry of VROMI, they have done all that they could to go to plan B and hopefully sooner rather than later we will have access to those four classrooms as well,” the Minister disclosed at the Council of Ministers press briefing. This week is also orientation week for the St. Maarten Vocational Training School.

Additionally, many of the students who failed the FBE exit exams, scored very low and are having difficulty being placed in a school. “Not all of them have registered as yet so that is still an issue that is appearing on paper; not necessarily at the school. The inspectorate department as well as all of the school boards as well as public education are working together to alleviate this issue,” Minister Jacobs said.

She is hoping that by the end of the first week of school, to provide a more accurate picture on how the school year began.

Meanwhile, the Minister disclosed that several school activities for this week have started including a training for school staff comprised of 18 participants: physical education instructors, student care coordinators, classroom teachers and music teachers. This will be done at the Dutch Quarter Community Center. The Education Minister also disclosed that there are training opportunities for teachers that would be funded by UNESCO, minimizing the training costs for teachers.

On a brighter note, the Education Minister thanked those volunteers who assisted in the painting of the Oranje School and the St. Maarten Vocational School during the holiday period.