On behalf of the President and Board of the Caribbean Broadcasting Union (CBU) it is my pleasure to invite you to register for the 47th Annual General Assembly (AGA) taking place in Havana, Cuba from October 24 to 27, 2016.

Against the backdrop of culture-rich Havana, media executives from the English, Dutch, French, and Spanish Caribbean will gather at the Hotel Nacional, at the invitation of CBU member, Instituto Cubano de Radio y Televisión (ICRT).

Highlights of this year’s Assembly include a forum on “Competitiveness in the Caribbean”, featuring Dr. Justin Ram, Director of Economics of the Caribbean Development Bank, a seminar on Disaster Risk and the Media, to be addressed by Mr. Ronald Jackson, Executive Director of the Caribbean Disaster and Emergency Management Agency (CDEMA), a spotlight on Digital Radio standards featuring Mr. Lyn Mansfield of World DAB and Mr. Carlos Acciari of DRM, as well as a half-day seminar on “Doing Business in Cuba”, hosted by the national Chamber of Commerce.

As always, the best of the media offerings from the region will be celebrated at the Caribbean Broadcasting Awards gala, on the evening of Tuesday, October 25. In addition, all delegates are invited to stay after the Members’ session on Thursday October 27, for an afternoon trip to enjoy the art and handicraft at La Feria in Old Havana, as well as a day tour of Pinar del Rio on Friday October 28.

The CBU has negotiated discounted airfare for delegates travelling to Havana on Copa Airlines. The discounts are valid for the event attendee and one (1) travel companion, for travel up to 5 days before and after the AGA.

To access the discounted room rates at the conference hotels, complete the enclosed Registration Form and make payments directly to CBU. The extended deadline for hotel bookings is August 15, 2016. After that date, rooms are subject to availability and higher rates.

Registration details can be found in the attached Information Note and Draft Programme, as well as on the CBU website www.caribroadcastunion.org.

For more information about the customized packages for sponsors and exhibitors, contact Mrs. Loretta Skeete at loretta.skeete@cmccaribbean.com or the CBU Secretariat at admin@caribroadcastunion.org 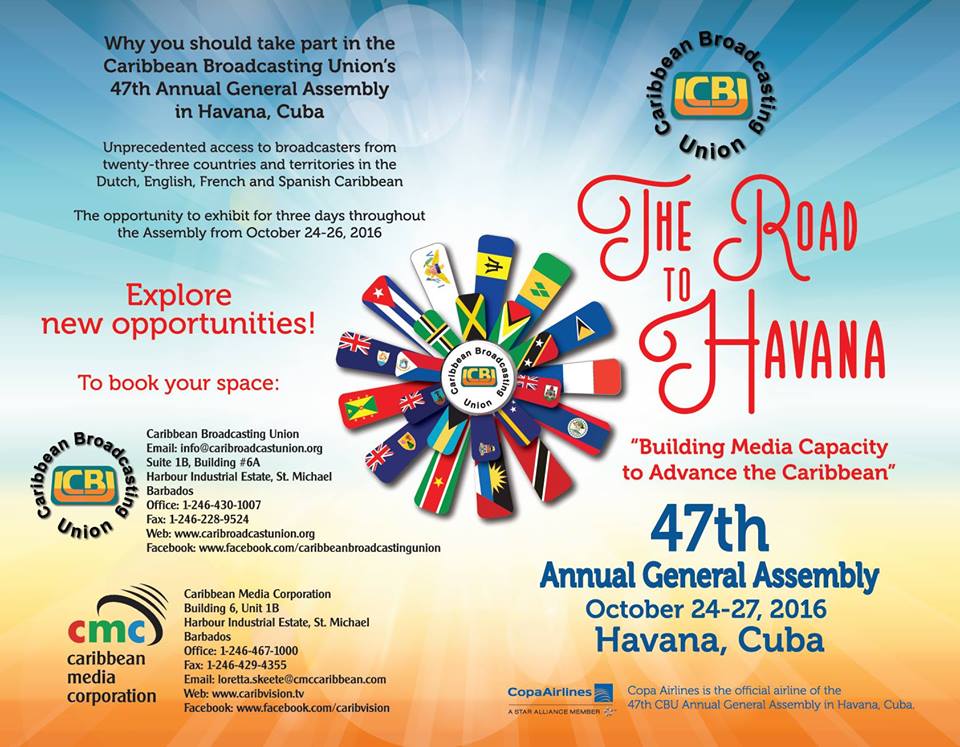