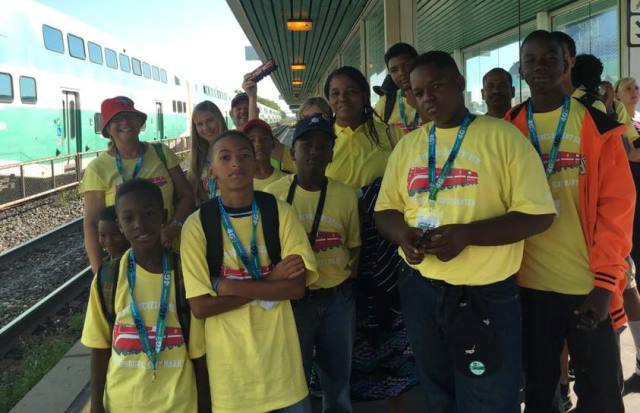 Day nine was a rest day. We slept in. The morning was earmarked for rest, time to catch up on writing in the journals and laundry.

The afternoon was spent at the batting cages at the Niagara Sports Practice Center. The boys took turns in the coin-operated cages. Speeds ranged from 35 mph to 75 mph. You picked the cage for the speed you wanted to hit. Puppy, our 6-year-old, went into the 35 mph. Out of 20 machine made pitches he hit seven. We spent an hour batting and then another hour fielding. We are scheduled to play one more game.

The boys worked so hard, our Rotary host Lezlie bought the group Ice Cream. At the ice cream store Laura showed up. She was one of the VTT coaches that visited the island 18 months ago. It was great to see her and catch up on what she is doing. She is a strength and conditioning coach and currently supervises the four at a time zip line ride at the Falls.

While the boys practiced, the parents went to the mall to shop and Lisa went to a discount book store and loaded up on new reads for the team.

We went back to the house, and each boy had to pick one of the new books and read and fill out a book report form.

Dinner was a treat. Adonis and Skylar teamed up to cook. They grilled fresh corn on the cob, hamburgers and hot dogs. Awesome. The boys handled the clean-up and it was back to Niagara Falls to see a magic show at The Greg Frewin Theatre.

The magician started the show by appearing on stage from seemingly nowhere sitting in a race car. The show only got better. He put a lady in cage. Covered it with cloth. Spun the cage around and pulled the cloth off. In the cage was a tiger. Three other tricks included different tigers. He made birds appear and seemed to transport Chuck the Duck from a box on one side of the stage to a bucket on the other.

For one trick the magician threw a beach ball into the audience to randomly pick some volunteers. Tre stood up and tried to catch it, but forgot to say leave. So Big King went for it and knocked the ball out of Tre’s hands. The Magician laughed and let Tre be in the show.

Afterwards we walked a few blocks to Niagara Falls. At night colored lights are projected onto the falls.

Then at 10:00pm we sat on the grass to watch fireworks.