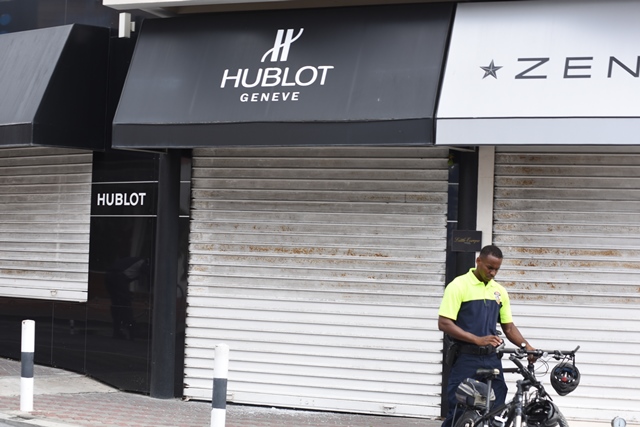 PHILIPSBURG – On Monday, July 25, at approximately 10:00am, the Emergency Central Dispatch received the first call of an armed robbery in progress at Hublot Little Europe located on Front Street across from Jump-up Casino.

Immediately several police patrols and detectives were sent to the scene to investigate what had taken place.

On the scene, investigating officers learnt that three masked men, dressed in dark clothing, two of whom were carrying a sledge hammer, and one with a gun, had attempted to gain access into the establishment by smashing the glass door. After numerous failed attempts to destroy the glass door, the rolling shutter system was activated from the inside, totally denying the robbers access to the building.

When the culprits realized that their attempt had failed, they immediately fled the scene and jumped into a waiting vehicle parked nearby, and drove off.  Police made a complete search of the area, but did not locate the suspects or the suspects’ vehicle.

The suspects did not gain access into the establishment, and did not succeed in robbing anything.

The Special Robbery Unit is investigating this case, and is asking anyone with information regarding this attempted robbery to call the police department at 542-2222 ext 214 or 215 or the police tip line #9300.

PHILIPSBURG, St. Maarten – The business fraternity of Philipsburg was once again impacted by crime on Monday morning. This time the jewelry store named Hublot Geneve was the victim.

Initial reports state that a light blue to greenish colored jeep was used to transport four robbers who jumped out of the jeep and proceeded to smash the showcase of the jewelry store stealing the contents. It is also said that they conducted a robbery inside of the store with the use of firearms before casually driving away from the crime scene.

Reports further state that the robbers drove towards the district of Pointe Blanch where they made their escape.

The police was called in and responded by sealing off the access and exit to Pointe Blanche, they also sealed off the exit from Philipsburg towards Sucker Garden. All vehicles leaving Pointe Blanch were being searched by the police on Monday morning.

Chief Police Inspector Ricardo Henson told our news room on Monday morning that the police are conducting an investigation of the robbery to establish the details f the crime. He could not provide further information.