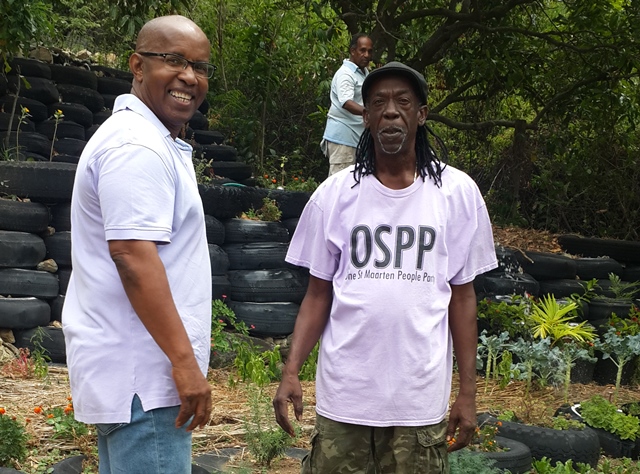 PHILIPSBURG – Well-known local agricultural warrior Maurits Joslyn Richardson is being put forward as an electoral candidate to contest the September 26 election on the One St. Maarten People’s Party (OSPP) ticket.

Richardson was among the first St. Maarten nationals to study agriculture at University level and has over the years made numerous proposals as to how agriculture can be used to the betterment of the island. He currently runs a farm in South Reward where he practices organic farming. He believes a lot more should be done by the powers that be to promote agriculture on the island.

“Over the years I have been trying to bring attention to how important agriculture is to the island, but not much attention has been paid to this by the government. With my knowledge in this field and my background I believe it is time for me to quit standing on the sidelines and hoping the government will eventually realize the importance of agriculture to the island, and to get involved directly,” Richardson explained as his reason for stepping into the political arena.

He added that he opted to join the OSPP because he has through the years noted the efforts of party leader Lenny Priest to improve the community even as not being part of government.

Leader of OSPP Priest explained that over the years he has read the various proposals submitted by Richardson related to agriculture, and listened to the ideas he proposed. He believes more persons, especially young persons locally should be encouraged to become involved in agriculture. He recommended that two scholarships be set aside annually, specifically for young people wishing to pursue a study in agriculture.

Priest said he is pleased to launch Richardson as a candidate for the upcoming elections because of his passion for improving his community, which he believes makes Richardson a good fit with the party and its goals.

“This election is very important like every other election of the past. However, the vast difference is that each of the political parties in government today have been part of the Executive Branch of the government since attaining our separate status within the Dutch Kingdom on October 10, 2010. Just think about it. What will they, or can they, tell you that they are going to do different this time around?” Priest questioned.

“They had their chances to make it right for you over the last five to six years, but they refused, instead they choose to bring shame on this young nation based on their many illegal actions. They choose to stay in government at any cost to fulfill their personal needs. Now is the time that you fulfill your personal needs and vote the OSPP into office,” Priest stated.

Meanwhile, OSPP president Lloyd Beaton stated, “St. Maarten is at a threshold of going backwards if we don’t take the bull by the horns and make sure that the young boys and girls on the block; our graduating students on the island and those returning to St. Maarten find suitable employment in their country.”

He encouraged local voters to “be part of that change that will take St. Maarten on a different course, one of prosperity for all.”

Photo Caption: Leader of the One St. Maarten People’s Party with new candidate Joslyn Richardson, at Richardson’s South Reward organic farm. A labourer waters the plants in the background.