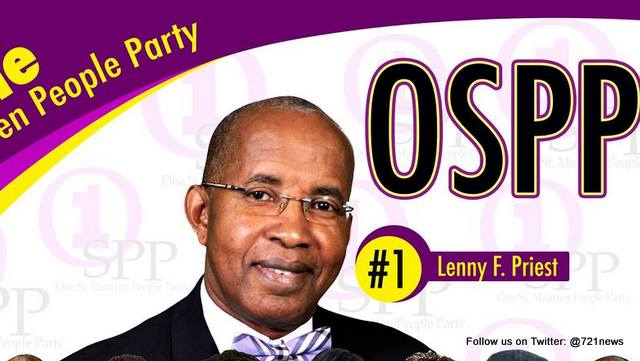 PHILIPSBURG – Congratulations were extended to the I Can Foundation on the occasion of their 20 year anniversary by the One St. Maarten People Party (OSPP) and to Police Chief Carl John on being officially inaugurated.

“We congratulate the I Can Foundation and particularly president and founder Cassandra Gibbs. She is a clear example of putting others before self, putting country before self. Through what she has done for these kids and this community over the past two decades, we can all agree that she has made and continues to make a tangible difference in the lives of many families.

She recognized a need and didn’t just sit and wait for government or for someone else to do it. She stepped up to the plate and boy, did she do a great job. She did all she could do to successfully meet that need and she continues to do so today. We also congratulate her team because it’s a team effort and we say thank you to you all for safeguarding our children,” leader of the OSPP Lenny Priest said.

The OSPP also took note of Police Chief Carl John’s inauguration and considers this encouraging. “We congratulate the new Police Chief and we hope to see many good things from our police force. We hope to see more officers from our local police force receive the opportunity to travel to the academy in Holland to become better prepared to take up the top jobs as the need arises.

We know that that there are many young officers within the force who are interested in attending the police academy in Holland, and we urge the Minister of Justice and the police management team to identify them and encourage them to further their studies now. These young men and women would jump at the opportunities if they are approached.

We encourage the public to give their full cooperation to the police force in the interest of building a safer St. Maarten,” Leader of the OSPP Priest said in a press release issued on Monday, July 18.