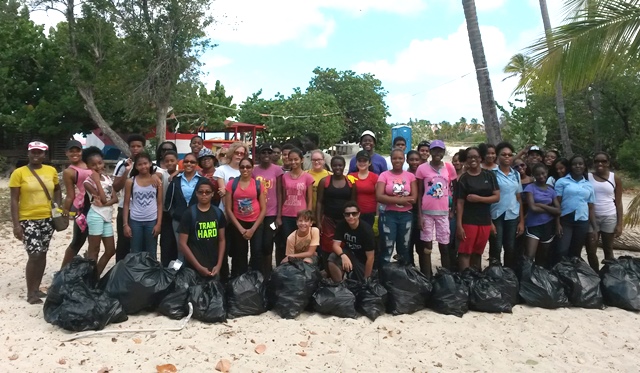 MULLET BAY – On Tuesday, June 21, HAVO 1 and 2 students and teachers from Milton Peters College (MPC) volunteered for a Mullet Bay cleanup in collaboration with Environmental Protection in the Caribbean (EPIC), and the EPIC environmental education program.

EPIC’s Environmental Educator Laura Bijnsdorp applauded the students’ efforts, but also is concerned: “EPIC believes beach cleanups directly contribute to creating a healthier beach environment as well as demonstrate the value of protecting and preserving the region’s coastline. We are very proud of all the students, teachers, parents and schools this year that have made the effort to join our education program and chose to conduct cleanups around the island. But it is also alarming that, every few weeks after a cleanup of areas such as Mullet Bay Beach and Little Bay Pond, they are once again littered with trash. It shows a huge lack of responsibility, care and management on how we manage our waste as a society on our island.”

During the cleanup, plastic bottles, styrofoam pieces, package wrappers, an array of condoms, fast food containers, aluminum cans, glass shards, and clothing were among the items that seemed to have been carelessly discarded by the beach’s visitors.

Bijnsdorp stated: “The ocean is a great source that provides us with the basic elements of life. Not only does it produce over half of the oxygen that is in the air we breathe, but it is an imperative part of the water cycle, supplying us with the water we drink. It is pertinent that we all realize the profound stake we have in an ocean that is abundant and healthy. The earth’s oceans will have more plastic than fish by 2050, according to a January report published by the World Economic Forum.”

“The frontiers of this necessary resource are the world’s beaches, which support the health of the ocean. During cleanups, participants often receive compliments accompanied by concern from on-looking visitors. Beaches are not just an attraction for our vacationers, who support our economy, but a nesting ground and a habitat for wildlife,” she continued.

Humans generate more than 300 million tons of plastic annually, an amount equal to the combined body weight of the entire global adult human population and nearly half of the plastic is only used one time before it is tossed away to eventually find its way to the oceans. So it should come as little surprise that by 2050, it is a virtual certainty that every seabird on the planet will have plastic in its stomach.

Recent estimates indicate that upwards of 8 million tons of plastic are added to the planet’s oceans every year, the equivalent of a dump truck full of plastic every minute. That is enough plastic to have led one scientist to estimate that people who consume average amounts of seafood are ingesting approximately 11,000 particles of plastic every year.

This happens through bioaccumulation, which means that toxins from plastic and potential additives such as plasticizers, antioxidants, anti-static agents and flame-retardants are ingested by smaller and smaller creatures (as it breaks down into smaller and smaller particles) and accumulates in greater and greater concentrations up the food chain, with humans at the top.

Some of the harmful chemicals that can build up in the system this way are known to cause: cancer, endometriosis, neurological damage, endocrine disruption, birth defects and child developmental disorders, reproductive damage, immune damage, asthma, and multiple organ damage.

With this in mind EPIC would like to remind beach-goers to take care of what they bring to the beach and leave nothing, but footprints and sandcastles at the end of the day.

To find out more about EPIC’s free environmental education program and their summer activities surf to: facebook.com/epicislands.