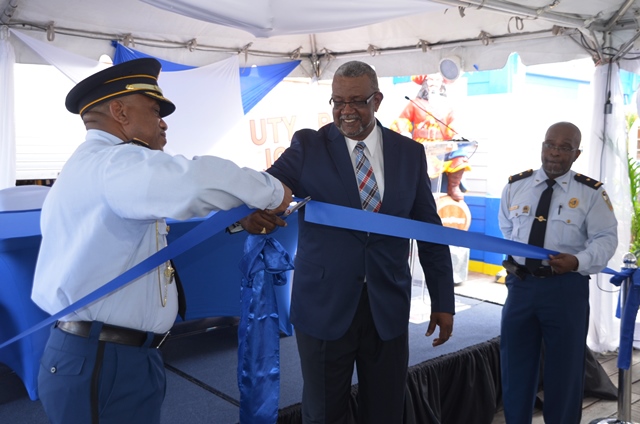 PHILIPSBURG, Sint Maarten — Leader of the United St. Maarten Party (USP) MP Frans Richardson said after years of talk, surveillance cameras in Philipsburg is finally a reality. Phase 1 of the project was unveiled on Thursday at the Captain Hodge Wharf in Philipsburg.

Phase 1, budgeted for this year, covers the Philipsburg area until and including the outer-skirts (until the round-abouts). Phases 2 and 3 which extends out to cover the entire Dutch side will get underway as of next year. The system will be monitored 24 hours by the police force. There will also be informative signs placed throughout Philipsburg to warn the public and visitors alike that cameras are in place and the area is being monitored.

“We are proud today to be able to give the police force another tool to be able to fight crime. Surveillance has been spoken about for quite some time but we were determined to stop the talk and finally get this very important project off the ground. Our people and our visitors depend on us to keep them safe. Our police force depends on us to give them the tools to keep people safe. This was a priority for the USP and the Minister when we assumed responsibility for the Justice Ministry, putting our people first,” Richardson said.

He stressed that the main benefit of surveillance cameras in public spaces is also the increase of public safety. Additionally, crimes can be deterred before they even begin in some cases. “If a suspicious individual or individuals or items are seen in an area, the authorities can move into the area before any damage is done or any crime is committed. People’s fear of crime can also be reduced, while their sense of security is enhanced.” MP Richardson also explained that surveillance camera footage could possibly be used in court as evidence against a culprit.

“This is also important for our tourism sector upon which we depend. Will cameras prevent crime? No. But it’s a step in the right direction in serving as a deterrent in some cases and in giving the police another “weapon” to fight crime with. Our party congratulates the Minister of Justice who continues to work hard for St. Maarten and the Council of Ministers for getting this done,” MP Richardson said.