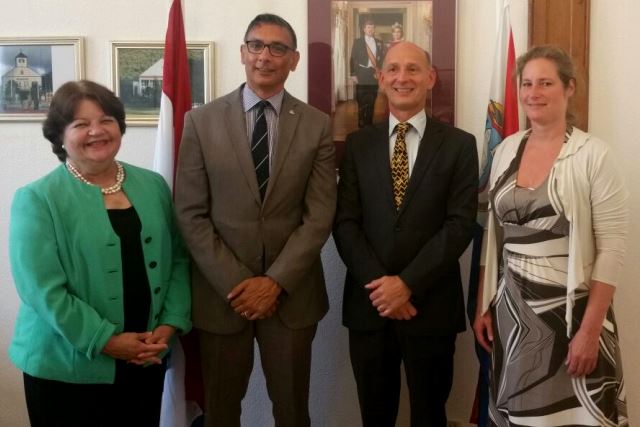 THE HAGUE, The Netherlands – Incumbent Kingdom Ambassador Norbert Braakhuis, well known to St. Maarten, who was previously stationed in Havana, Cuba, will be taking up his new post in Venezuela as per August 12, visited the Cabinet of the Minister Plenipotentiary accompanied by Jacinda Hofland from the Ministry of Foreign Affairs.

He was received by the Cabinet’s Director Perry Geerlings and acting Director of the Cabinet Margie van Gijn.

As a known critic of various Dutch policies and approaches towards the Caribbean countries in the Kingdom, the Ambassador enquired about the latest state of affairs in the (political) relationship between St. Maarten and The Netherlands. Braakhuis proceeded to give a brief overview of the causes he will be championing during his four-year stint in Venezuela. At the same time he took inventory of the present influences the political situation in Venezuela specifically has in St. Maarten. His concern was also the possible safeguarding of economic interests St. Maarteners and St. Maarten-based businesses might presently have in Venezuela.

Basically, the goal is to bring about closer ties between the countries in the Dutch Caribbean and Venezuela, who because of its geographical position has influence within the region. In the vision of the Ambassador, the Kingdom policy towards Venezuela should be more of a Neighbourhood Policy next to or separated from the EU neighbourhood policy. This is because Venezuela is considered a foreign neighbour of the Kingdom and more in particular The Netherlands.

Notwithstanding the economic crisis now being faced in Venezuela, the Ambassador is of the opinion that during his tenure much can and will be achieved. An important area he wishes to work on is the making and implementation of policies that will reflect the entire Kingdom participation at all Dutch Embassies throughout the region. In light hereof, Geerlings suggested to convene periodical meetings between the Kingdom Ambassadors in the region and the three Caribbean countries of the Kingdom. A suggestion well received by Braakhuis.

On the suggestion of Geerlings, Braakhuis wished to look keenly into the area of introducing durable agricultural practices, through Public-Private-Participation.

The Director, during the meeting, emphasised the need for enhancing relationships within the region, where this could be made possible through diplomatic contacts through the various Dutch Embassies throughout the region.

At the conclusion of the meeting, the Director and all present in the meeting wished the Ambassador well in his new endeavours, and reiterated the willingness of St. Maarten to render assistance in the gathering and dissemination of relevant information, whilst the Ambassador assured he would visit St. Maarten again very soon.