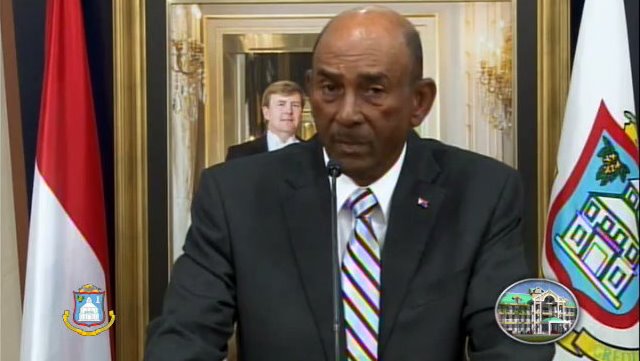 PHILIPSBURG – Minister of Finance Richard Gibson Sr. defended President of the Central Bank of Curaçao and St. Maarten Emsley Tromp, amidst news reports on the performance of the Bank.

“I have taken notice of the recent news reports surrounding the Central Bank of Curaçao and St. Maarten. It is lamentable that confidential information obtained in the course of exercising the regulatory duties of the CBCS has been leaked to unauthorized persons,” Gibson said in a statement to the media on Wednesday, June 22, during the Council of Ministers press briefing.

“The publicity of this information is damaging to the reputation of the CBCS and sends the wrong message to local and international investors in terms of doing business in Curaçao and St. Maarten,” Gibson noted.

“The stewardship of the President of the CBCS over the last 30 years has been stellar and in my view no facts exist to question the integrity of the President. As Minister of Finance of St. Maarten, I am of the opinion that good governance and the application of the rule of law should be the basis on which the CBCS and its President should be judged. In the interest of the CBCS and the countries forming part of the monetary union, it is my fervent hope that all parties will refrain from debasing the reputation of the regulator with rumors and innuendo,” Gibson continued.