KINGSTON, Jamaica, Tuesday June 28, 2016 – Nine passengers who flew into Jamaica yesterday were refused entry, while another eight were quarantined because of yellow fever concerns.

The 17 were among travellers who flew into the island from Trinidad & Tobago and Panama and were unable to produce evidence that they were vaccinated against the virus, according to the Jamaica Gleaner newspaper.

It quoted Minister of Health Dr. Christopher Tufton as confirming that five of the passengers arrived on Caribbean Airlines from the twin-island republic and they were all sent back home, while the other 12 came in from Panama. Of those 12, four were refused entry and the other eight quarantined.

Tufton said Jamaica has to take the threat of yellow fever seriously. Yellow fever is an acute viral disease transmitted by infected mosquitoes. Symptoms include fever, headache, jaundice, muscle pain, nausea, vomiting and fatigue, and according to the World Health Organization (WHO), a small proportion of patients who contract the virus develop severe symptoms and approximately half of those die within seven to 10 days.

Earlier this month, the Jamaica government issued a statement indicating that all travellers over the age of one year who arrive in Jamaica from countries where there is risk of yellow fever transmission – including those passengers transiting those countries – would be required to produce a valid certificate to show they have been vaccinated.

It said it was taking the step to prevent the importation of the virus into Jamaica where the disease does not occur but where the mosquito vector and human hosts are present.

“Failure to produce a valid yellow fever vaccination certificate at a Jamaican point of entry may lead to refusal of entry, or quarantine until the traveller’s certificate is produced,” the government advised. 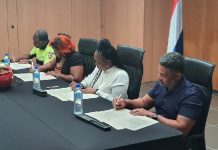 Minister Richardson: Agreement on legal position of police personnel milestone for the Ministry