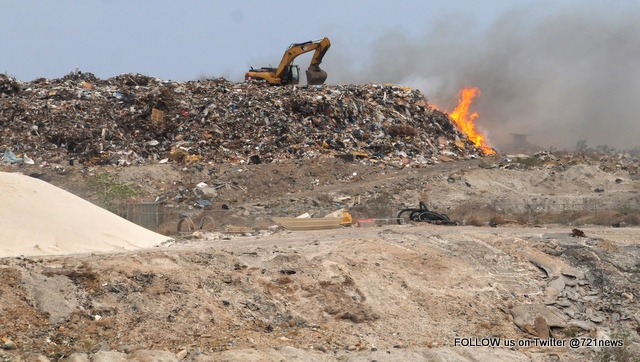 PHILIPSBURG – Minister of VROMI Angel Meyers and Prime Minister William Marlin have assured the public that all is being done to ensure that the fire at the landfill is contained.

“Monday we had an emergency meeting and I indicated that all resources would be made available to contain the fire. Since yesterday, the contractor has been hauling some 1,000 cubes of dirt to use as coverage of the landfill to curb the burning,” Minister Meyers said at Wednesday’s, April 20, Council of Ministers Press Briefing. “Three additional machines have been brought in to combat the fire while the regular operations of the landfill will continue.”

The Minister noted that it is difficult not to have fires at the landfill, but pointed out that measures will be put in place to contain its impact, including addressing the problem of the landfill, which has passed its time. “This course of action cannot continue. As was indicated time and time before, the landfill has reached its maximum capacity. There are different competing interests in moving forward in looking at waste-to-energy. There were discussions where there was a sort of a stalemate as it concerns the power purchase agreement, but this government has made a decision that we will take control of the situation and make a decision this week as the way going forward,” Minister Meyers said.

Additionally, fire hydrants will be erected on the landfill vicinity to help with firefighting there.

Prime Minister Marlin also called for action to be taken to address the landfill fires. “As long as we don’t do something about bringing in a facility to properly manage the waste that we have, we will continue, particularly during the dry season to have fires like we’ve always had in the past,” he said.