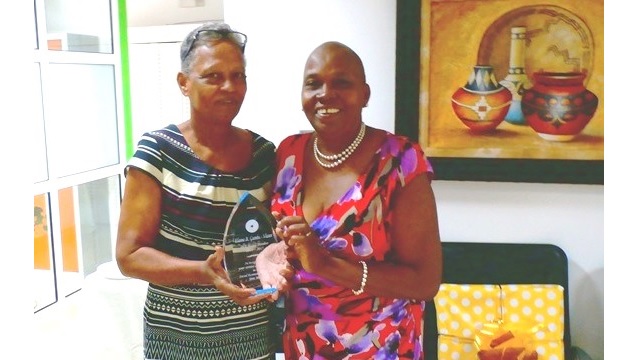 HARBOR VIEW—-In a small ceremony on Thursday, December 10, surrounded by family and friends the Social Economic Council (SER) bid farewell to Mrs. Elaine Gumbs-Vlaun. Mrs. Gumbs-Vlaun was part of the first SER board during the first three years 2011-2014 of the institution. In May 2014 Mrs. Gumbs-Vlaun was reappointed by government to serve for a second term as an independent expert.

As the SER National Ordinance stipulates a retirement age of 70, Gumbs-Vlaun had to step down as a member of the SER upon reaching that age.

Elaine Gumbs-Vlaun was lauded by Chairwoman Oldine Bryson-Pantophlet for her remarkable contribution to the establishment phase of the SER. The SER was one of the new institutions established after October 10th 2010, as a result of Sint Maarten attaining country status within the Kingdom.

Chairwoman Bryson-Pantophlet referred to Gumbs-Vlaun’s patience and commitment during the early years of the SER. “Mrs. Gumbs-Vlaun is the ideal SER member and is well respected by the board and staff” she stated. Secretary-General, Gerard Richardson thanked Mrs. Gumbs-Vlaun for her patience and unwavering support throughout the years. He stated that he never saw Gumbs-Vlaun lose her composure during the sometimes heated SER debates. “Mrs. Gumbs-Vlaun always got her point across in an eloquent and respected manner. Although we hate to see her leave, the SER door will always remain open to Mrs. Gumbs-Vlaun. Substitute member, Aurillio Baly thanked Gumbs-Vlaun on behalf of his mentor, former SER member William Reed for her contribution throughout the years. Member Bienvenido Richardson thanked Gumbs-Vlaun for her dedication to the institution and her thoughtfulness of the less fortunate persons within our community.

In her farewell speech Mrs. Gumbs-Vlaun thanked her family, fellow members and staff for their support and invaluable contributions to the SER. She considered it gratifying that the success of the SER was a team effort, made possible by the board and staff.

For Elaine Gumbs-Vlaun, membership of the SER was the crown on a vast career spanning decades as the first social worker Sint Maarten ever had. She served as the founder of the government department of Social Services, a former Island Council member and Sint Maarten’s first female parliamentarian during the time of the former Netherlands-Antilles. Above all her professional achievements, she is a loving mother, wife, sister, aunt, godmother and most recent a proud grandmother. Mrs. Elaine Gumbs-Vlaun is a true Sint Maarten icon and role model for the up and coming generation.

Chairwoman Oldine Bryson-Pantophlet (on the left) presents a token of appreciation to former member Elaine Gumbs-Vlaun.