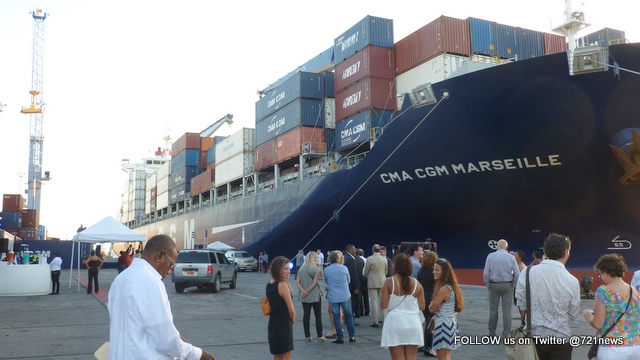 PORT ST. MAARTEN, Sint Maarten – On Saturday afternoon and evening, during the official inauguration ceremony of the newly acquired Terex Gottwald Model 6 Crane, and the welcome ceremony for the CMA CGM Marseille Container Cargo Vessel – the largest vessel to operate at Port St. Maarten Cargo Facility – the buzz coming from various stakeholders was about the strategic investments that have been made by Port St. Maarten in its cargo facilities and equipment over the years by the Board of Supervisory Directors and port Management.

Minister of Transport Irania Arrindell during her speech at the ceremony recognized the two grand occasions being celebrated in connection with the crane and the vessel Marseille.  Minister Arrindell told the gathering that her goal is to act as facilitator and to promote positive results for all stakeholders.

Minister Arrindell added that Port St. Maarten had seen steady growth which was in line with increased economic activity.  Minister Irania Arrindell also mentioned about the development of a ships registry in order to generate additional income for Government.

The Minister congratulated all stakeholders for making Port St. Maarten stand out.

Chief Executive Officer (CEO) Mark Mingo of Port St. Maarten, thanked George Pelgrim who he described as an icon in the country’s cargo development.  He also thanked the Board of Supervisory Directors as well as Management at Port St. Maarten with their role leading to the purchasing of the crane as well as RBC Bank for providing the funding in order to make it a reality.

CEO Mingo presented some stats which revealed a 30 per cent increase in cargo business; so far for 2015, the port has handled 6,000 TEUs (Twenty foot equivalent container units); and there has been a 21 per cent growth in transshipment cargo services to the neighboring islands.  Mingo pointed out that CMA CGMs growth for the destination has been double digits.

Mingo said he was looking forward to 2016 when the port would continue to cater to homeporting which would result in vessel provisioning and thereby creating more demand for cargo resulting in an increase in business for the port and companies in the field.

Pelgrim whose company Intermar has been providing services at Port St. Maarten for over 30-years, applauded port authorities, pilots, crane operators, dock workers, local shipping companies for the progressive attitude taken in the development of the country’s cargo sector, and that it should continue in a non-bureaucratic fashion for the future.

CMA CGM has been servicing Port St. Maarten for more than 35 years.  It is the third largest container transportation company in the world, which was founded in 1978 in Marseille by Jacques Saade.  CMA CGM is present in more than 160 countries through its network of over 655 agencies, with more than 22,000 employees worldwide (4,500 in France).

The 190 foot long CMA CGM Marseille was welcomed on Saturday at Port St. Maarten.  The vessel is one of the newest in the container company’s line built in 2015.

One highlight of the evening was a check presentation to the St. Maarten Vocational School to Principal Norma Barry to further develop the schools programs for the community.

Port St. Maarten now possesses the largest mobile crane – Terex Gottwald Model 6 – in the North Eastern Caribbean.  It is part and parcel of the operations at the cargo section of the Dr. A.C. Wathey Cruise & Cargo Facility.

The acquisition of the Terex Gottwald Model 6 Mobile Harbour Crane and the additional Bromma spreaders will in no doubt bolster Port St. Maarten’s position and continue to expand its cargo related activities and foot print within the North Eastern Caribbean region.

The Terex Gottwald Model 6 harbour crane is high performance for higher handling rates, and is part of the large crane family from Terex Port Solutions.  The crane can be used on ships up to post-Panamax and Capesize Bulker class.

The TelEm Group of Companies have also contributed to the new port crane by providing the power for the remote access device that tracks the crane performance and maintenance. This device is powered by Telcell 3G service.  The Terex Gottwald engineers installed the modem and it was tested from Germany during the commissioning of the crane.

The Model 6 crane is equipped with the technical and ergonomic functions and features required to improve productivity, environmental compatibility and facilitate operation to boost economical and sustainable cargo handling in ports and terminals.  Port St. Maarten crane staff is already trained in using this model of crane.

Port St. Maarten cargo facility investments have led to a steady growth in containerized business making the island a regional sub-hub for the North Eastern Caribbean.

PHOTO CUTLINE: On the left is the boom of the Terex Gottwald Model 6 Crane and the CMA CGM Container Vessel, the largest to dock at Port St. Maarten, MV Marseille.