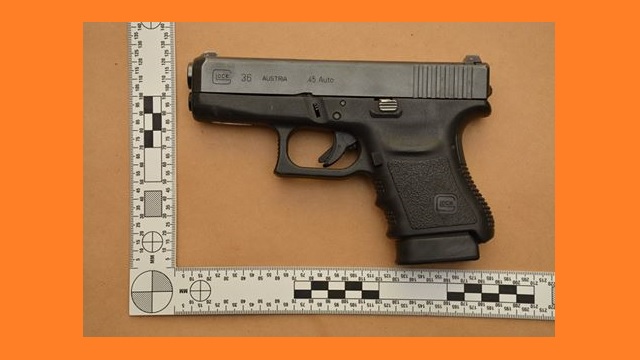 PHILIPSBURG, Sint Maarten –– On Wednesday December 9th at approximately 02.00 p.m., based on a very long and extensive investigation, police were able to arrest a 37 years old male suspect with initials F.F.C. The arrest was made at his residence in Garden of Eden Dutch, Quarter. During his arrest the suspect resisted, but was quickly overpowered by the arresting officers and placed in handcuffs.

The police department has been searching intensively for this suspect for the last six months. He has been suspected in the numerous violent home invasions and armed robberies in the areas of Weymouth hill, Betty’s Estate and Saunders and at various locations on the Dutch side of island. He is also the suspected in at least two cases whereby he fired shots at the police officers as part of his escape tactic. During a search of the home of the suspect a pistol was found and confiscated for further investigation.

This suspect who is considered armed and extremely dangerous by police has managed to successfully evade his capture, until his arrest on December 9th 2015. This investigation has been very lengthy for the Police Force of Sint Maarten, requiring extra manpower and a lot of overtime hours next to other financial issues which had to be covered. The assistance of the extra manpower coming from the Police Forces of Aruba and Curacao, the R.S.T. and Royal Marechaussee has contributed tremendously in this investigation and other investigations that have now been finalized.

The great improvement in the communication between the community and the police department by way of the Community Police Officers has also been a major factor in the successful capture of this suspect.

The police department is encouraging all communities to establish good communication between themselves and their Community Police Officers to share information by way of a “chat room” using one of the Social Media Outlets.

As in this case, the Community Police Officer with whom the information was shared immediately informed the Detective Department who, with limited resources, did a tremendous job in tracking the location of this very illusive suspect.

The police department has been in contact with Interpol who stated that an international warrant for the arrest for this suspect had been issued as he has been identified as a suspect in type of criminal activity on other islands in the region. The investigation continues and the suspect remains in custody. (See picture of gun found at the home of the suspect)