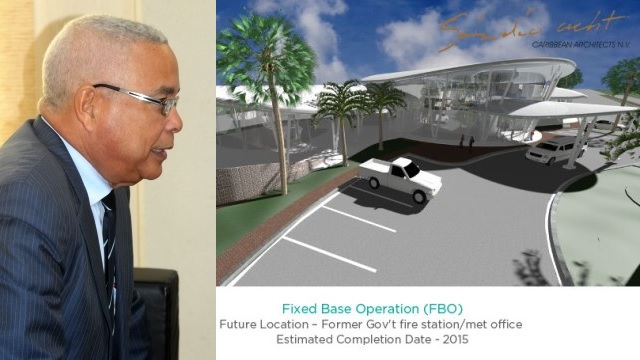 Philipsburg, St. Maarten – Caretaker Prime Minister Marcel Gumbs on Wednesday, November 4, 2015 disclose at a press conference that the also caretaker Minister of VROMI, has been instructed not to sign the building permit for the new FBO facility at the Princess Juliana International Airport pending advice which the Council of Ministers have sought from “three independent engineering consultants” to verify the cost per square meter of the project.

According to the outgoing Prime Minister, the cost of the project is some US$8 million. He also said that the tenants of the new facility will also have to add another US$1million to build their own offices inside the facility.

However, 721 News contacted sources at Signature by Arrindell, one of the tenants-to-be at the new facility and was told that officials of LICCOM, visited them in Miami about three years ago, accompanied by MP Theo Heyliger. The reason for the visit was to have LICCOM build the new FBO facility as a turnkey project. This deal was seen as a reward for the brother of the owner of LICCOM for helping set up then MP Patrick Illidge and destroying his political career with the bribery videotape. The cost of the turnkey construction quoted three years ago is however more or less the same price that the caretaker Prime Minister is now disputing.

The Board and management of the airport authorities did not go along with the LICCOM deal but decided to put the whole project on public bid contrary to what MP Theo Heyliger wanted. This is why the price today is the same price quoted three years ago.

“It is interesting that the outgoing Prime Minister still insists on refusing to sign the building permit for a company owned by the government, even after the Ministry of VROMI has given a positive advise based on the same documents submitted by the airport authorities,” one observer who spoke on condition of not being named told 721 News.

Another person who has been following the FBO saga since the beginning of the year noted that Marcel Gumbs first told the country that he couldn’t sign the building permit because the request was not submitted properly. He did not mention anything about the construction cost at that time when he was also acting as Minister of VROMI.

Anybody who has had to request a building permit knows that the requirements to grant this permit has nothing to do with the cost of construction or who the contractor is. This is not the concern of the Ministry of VROMI in deciding whether to grant the building permit or not. The main concerns is technical.

It will be recall that recently 721 News reported that according to our sources caretaker PM Marcel Gumbs wanted the managing director of the airport Regina Labega to apologize to him in writing allegedly because he is angry that she told Parliament that the FBO building was held up in his office and it make him look bad in the media. However, he did not put his demand for apology in writing to her when she ask for it.

The latest Moody’s Investor Service report which maintained the same rating of Baa2 with stable outlook for SXM Airport noted that “many of the remaining projects are delayed including the fuel farm relocation, Goddard Catering relocation as well as the construction of the fixed based operations (FBO) terminal and the rescue and fire and technical buildings.”

The analysts said “Our expectation is that some delays and cost overruns are likely to occur due to the project’s’ dependency on one another.”

With this latest move by the outgoing Prime Minister, the question people are asking is: can Marcel Gumbs and the other members of the Council of Ministers be held personally and collectively responsible for the new FBO building being unnecessarily delayed and therefore costing more than initially budgeted?

721 News will continue to bring the correct information to the public.