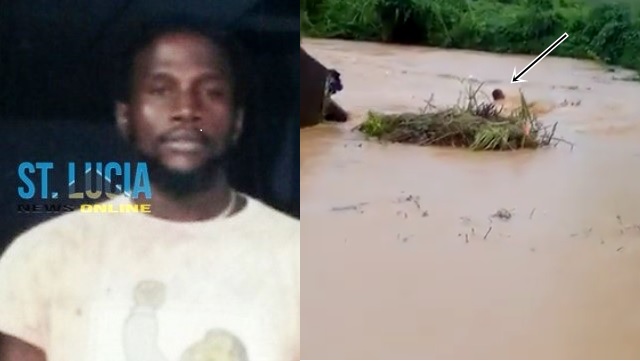 SAINT LUCIA — Thirty-nine-year-old Cletus Estephane who was swept away in a river in Odsan/Cul De Sac on Friday, Nov. 6, died trying to save a cow, relatives and police sources have confirmed.

The cow, and another man who was assisting Estephane to rescue the animal, reportedly survived.

A video uploaded on Facebook Friday afternoon showed Estephane fighting to stay afloat before he was swept away by the raging debris-filled water.

Towards the end of the two-minute video, several people were shown running towards Estephane’s location with a rope. But this action was a bit too late as Estephane disappeared in the murky waters.

A search ensued that afternoon but Estephane’s body was not discovered until Saturday morning, floating in the sea at Cul De Sac Bay, Castries, in the vicinity of Buckeye Terminal (formerly Hess).

The Police Marine Unit were notified and Estephane’s body was retrieved at about 9:45 a.m. and transported to Vigie, Castries, police said.

Relatives told St. Lucia News Online (SNO) that Estephane, a father of four children – ages 9, 6, 4 and 2 – was living in Goodlands, Castries but moved to Odsan to live with a male friend.

The male friend is alleged to be the owner of the cow.

Relatives said they heard that Estephane was holding onto a branch in the water when it broke. They were also told that a large piece of debris, believed to be a piece of wood, struck Estephane in the head moments later, causing him to lose focus and drown.