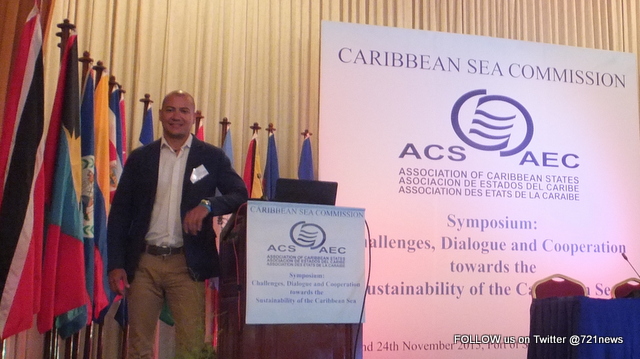 Port of Spain- Manager of the St. Maarten Nature Foundation and Vice Chair of the Dutch Caribbean Nature Alliance (DCNA) Tadzio Bervoets recently attended the Association of Caribbean States (ACS) Caribbean Sea Commission Strategic Symposium on how to tackle the lionfish invasion, sargassum seaweed and coastal erosion in the region in Port of Spain, Trinidad. The Nature Foundation representative was invited by the ACS based on previous experiences tackling aforementioned issues on a local, intra-regional and regional scale. “It was quite the honor to be invited and to be able to participate in the meeting and to share our experiences from Sint Maarten and the Dutch Caribbean. Not only were we able to make recommendations but we also learned new techniques and have received recommendations on how to tackle coastal erosion, lionfish and Sargassum seaweed locally. In the coming weeks both the Nature Foundation and the ACS will be communicating the results of the meeting to our officials so that we may better be able to handle these serious issues that affect the Caribbean Sea,” commented Bervoets.

The Caribbean Sea is a fragile and complex marine area that is shared by twenty five countries and eleven territories of varying sizes and stages of economic development  and  upon  which  the  populations  of those  countries  depend  for  their  social,  economic, cultural,  climatic,  aesthetic  and  other  benefits. The  reliance  on  the  Caribbean  Sea  to  derive  these benefits  has  been  the  catalyst  for  the development of a number of debilitating phenomena on  the  sustainability  of  the  marine  environment. This circumstance has been compounded by l phenomena like climate change which have also posed a threat to the viability of the Caribbean Sea. In this regard, recognition has been given to the need to develop strategies towards the preservation of the Caribbean Sea. The Caribbean Sea Commission was established in 2006 as a structured mechanism of the ACS to contribute to the protection of the Caribbean Sea within the context of sustainable development. This  endeavor,  which  has  become  known  as the  “Caribbean  Sea  Initiative”  (CSI),  has  gained international recognition through the grant of several resolutions of the United Nations General Assembly (UNGA), the most recent of which was agreed to in 2012 and entitled “Toward the sustainable development of the Caribbean Sea for present and future generations”.

The results of the meeting will be distributed to the various heads of state in the Caribbean Region and will form a basis for a region-wide response to lionfish, Sargassum seaweed and coastal erosion both locally and regionally with support coming from the Association of Caribbean States for successful implementation and completion.