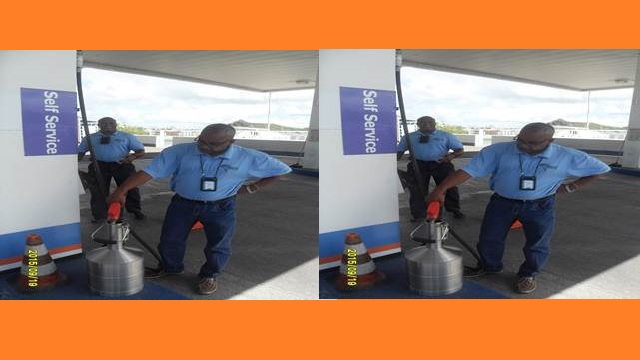 GREAT BAY, Sint Maarten (DCOMM) – During the months of September and October of this year employees of Section Economic Control of the Inspectorate of Tourism, Economic Affairs, Traffic and Telecommunications (Ministry TEATT) carried out controls on fuel dispensers at fuel stations, on the Dutch side of the island.

The National Ordinance on Calibration 28-02-2013 AB 2013, GT no. 446 contains rules for measuring instruments used in commercial trade, such as the requirements with which the instruments must comply or the conditions under which they may be used.

These measuring instruments are supervised by Inspectorate of Ministry TEATT and tested against the legal requirements. With this calibration and recalibration the government ensures that no faulty equipment is introduced into the market and the instruments used measure correctly.

In this specific case, a car owner who puts 20 liters of gasoline in the fuel tank must be certain that he/she is getting what he/she paid for. It is therefore required in commercial trade to use calibrated instruments.

A total of ten (10) fuel stations were controlled. The reference point or known quantity used to conduct a calibration check was 20 liters. During the controls it was observed that fuel dispensers on the island dispersed between ranges of -0.8 liters to +1 liters of fuel (per instance) based on the reference quantity of 20 liters.

Approximately, 46% of all fuel dispensers were found to be properly calibrated upon first control. This means that the amount of fuel dispensed was within the +/- 100ml tolerance range of 20 liters.

Customers and business owners must refrain from using fuel dispensers with a red sticker as these do not meet the legal test requirements and must be recalibrated and issued a green sticker before being put back into use.

Commercial traders who use a weighing/measuring device that has not been calibrated and approved by the government can be legally sanctioned ranging from monetary fine to imprisonment.

The Inspectorate encourages all citizens to always request a receipt for any commercial transactions.

For questions, concerns or complaints please visit the Inspectorate of Ministry TEATT at Tamarindesteeg #16 (Yellow Building) on the Pondfill, call 5424511/09 or email us idez.inquiries@sintmaartengov.org.

PHOTO CUTLINE: Staff from the Inspectorate Ministry TEATT carrying out a test of the dispenser at a fuel station.