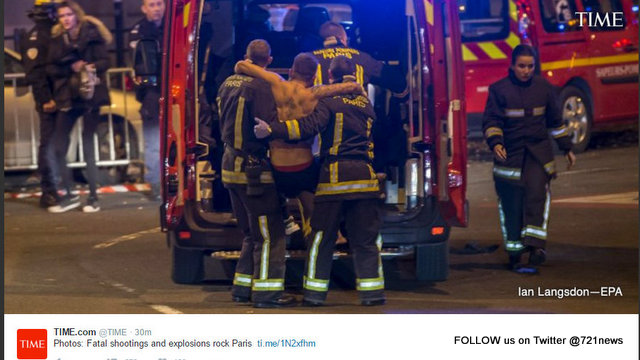 UPDATE !!!
Paris (CNN) — On a night when thousands of Paris residents and tourists were reveling and fans were enjoying a soccer match between France and world champion Germany, horror struck in an unprecedented manner. Terrorists — some with AK-47s, some reportedly with bombs strapped to them — attacked sites throughout the French capital and at the stadium where the soccer match was underway.

Scores were killed in the coordinated attacks late Friday, leaving a nation in mourning and the world in shock. CNN will update this story as information comes in:

• At least 153 people were killed in the Paris and Saint-Denis shootings and bombings, French officials said. Among the victims, 112 were killed at the Bataclan concert venue, according to the Interior Ministry. Saint-Denis is home to the national stadium where the match was being played.

• CNN affiliate BFMTV reports that SWAT units stormed the Bataclan concert hall and that the siege is over. Two attackers were killed, a police union said. Police brought out at least 100 hostages from the concert hall, a CNN producer said; some appear to be wounded. President Francois Hollande Francois told reporters outside Bataclan that “terrorists capable of carrying out such atrocities must know that they will face a France that is determined and united.”

• Deputy Mayor Patrick Klugman told CNN the death toll is going to rise significantly. “We are facing an unknown and historic situation in Paris,” he said.

• Hollande called the events “unprecedented terrorist attacks” and added, “This is a horror.” In a tweet, he said, “Faced with terror, this is a nation that knows how to defend itself, how to mobilize its forces and once again, knows how to overcome the terrorists.”

• French radio reporter Julien Pearce was inside the Bataclan theater when gunmen entered. Two men dressed in black started shooting what he described as AK-47s, and after wounded people fell to the floor, the two gunmen shot them again, execution-style, he said. The two men didn’t wear masks and didn’t say anything. The gunfire lasted 10 to 15 minutes, sending the crowd inside the small concert hall into a screaming panic, said Pearce, who escaped. He said he saw 20 to 25 bodies lying on the floor.

• One of the explosions at the Stade de France, home of the French national sports teams, outside Paris appears to be a suicide bombing, a Western intelligence source receiving direct intelligence from the scene told CNN’s Deb Feyerick. A dismembered body, consistent with the aftermath of an explosion from that type of device, was found at the scene, the source said. Watch: Explosion heard at Paris soccer game

• People were inviting people off the streets into their apartments, reports Philip Crowther, Washington correspondent for France 24.

• Traffic on several subway lines has been interrupted following the attacks, the Paris police prefecture reported. 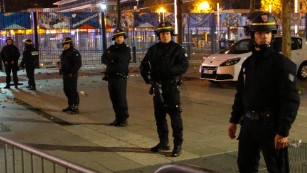