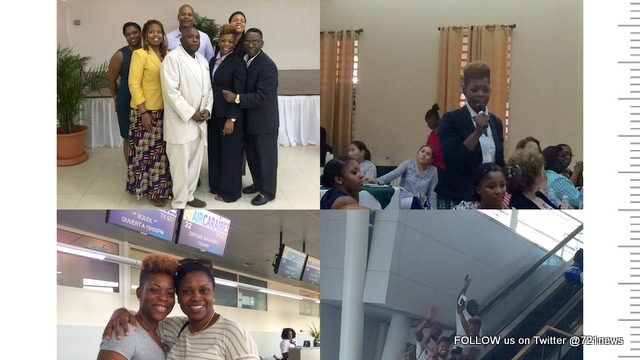 PHILIPSBURG – The giving back to the community project is not limited to only financial contributions. This was illustrated on the successful turn out and positive feedback of the Mental Health Foundation 2015 Conference.

Independent Member of Parliament (MP) Leona Marlin-Romeo, gave the opening speech on the second day of the conference and spoke of how a discussion two years ago materialized, “Bringing Life into thought, Bringing passion into purpose”.

The workshops though organized by the Foundation, the MP facilitated in making the connection with a close college associate Pascale Jean-Noel, a licensed Masters level Social Worker from New York State.

Pascale Jean-Noel, was more than willing to make a contribution to Sint Maarten by participating in bringing awareness on person centered treatment planning, trauma informed care, working with substance use disorders and understanding the practitioner’s role while providing mental health service as it relates to our community.

Jean-Noel is a second generation Haitian, and understood what it means to connect with an audience of Caribbean background.

Congratulations to the entire Mental Health Organization staff and management. A special recognition to Danette Gumbs for believing and going the extra mile.

The objectives of the conference in the MP’s opinion were met. The messages were clear, in particular, being careful not to limit ourselves as a people on how we judge others and their competencies based on what society has labeled them to be.

There is a need for widespread awareness on the topic of Mental Health. It is clear that funding is a major issue that limits the services to those diagnosed with mental illness.  It is imperative for legislation to be reviewed and created to address the Mental Health on Sint Maarten, MP Leona Marlin-Romeo pointed out.

The MP looks forward in having further discussions with the management of the Foundation.

PHOTO CUTLINE: MP Leona Marlin-Romeo in a collage of photo’s with the various guests from the United States of America who came to attend the Mental Health Conference.