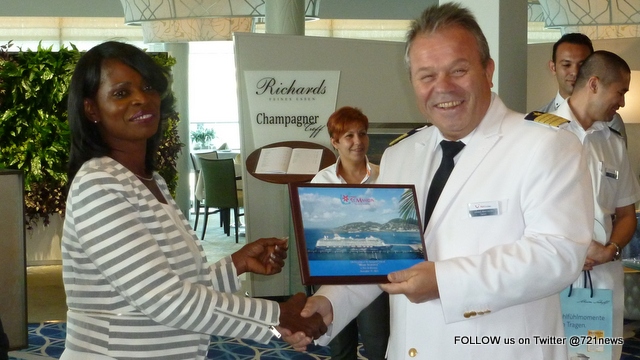 Minister Arrindell welcomed the captain, passengers and crew to Port St. Maarten and added that she looked forward to many more visits to the island for the season.  “I would like to toast to the Captain, his passengers and crew, and a hearty welcome to Sint Maarten,” Minister Hon. Irania Arrindell said on Wednesday at the ceremony.

Captain of Mein Schiff 3 Ioannis Anastasiou, thanked the Minister, Port St. Maarten officials, ship’s agent and others present for the warm welcome on behalf of his passengers and crew.

The Captain added that this was the first cruise season for the vessel and he was looking forward to it being a successful one.

Mein Schiff 3 homeports out of Barbados and La Romana, Dominican Republic and carries out a two week cruise.

This is the fourth new cruise ship within the past two weeks to include St. Maarten in their cruise itinerary for the 2015-2016 cruise season.  Port and Government officials recently welcomed Britannia of P&O Cruises, Anthem of the Seas of Royal Caribbean Lines, and Magellan of Cruise & Maritime Voyages.

Catering to the German market is one of Port St. Maarten’s marketing strategies which has been promoted over the years while attending cruise conferences and speaking with the cruise lines.

The recent inaugural call of Britannia which caters to the British market, is another cruise vessel that Port St. Maarten has attracted which is part of the port’s strategy to cater and develop the European market in the area of cruise tourism.