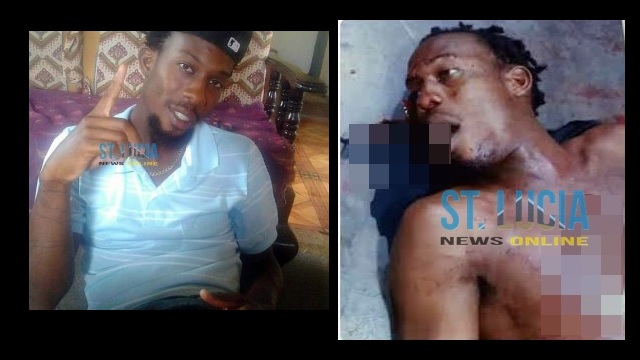 ~Martinique, the authorities have still not identified the deceased~

MARTINIQUE — Exactly one week after an armed robber was fatally stabbed in a hair salon in Dillon, Fort de France, Martinique, the authorities have still not identified the deceased.

However, the attention has been turned to a young St. Lucian man, Mandella Ronnie Ismael aka Biggs Capone, who reportedly died around the same time. A friend told St. Lucia News Online (SNO) that the photo of the alleged robber resembles Ismael.

A photo of the dead man, with visible wounds to his bloody chest area, has been in circulation in Martinique and Saint Lucia, with claims that Ismael was the man killed in the robbery by a 74-year-old customer.

Friends and relatives of Ismael have been posting condolence messages on Ismael’s profile since the day of the tragic robbery.

SNO contacted two persons, believed to be relatives, and they declined to comment.

When SNO contacted several of Ismael’s friends they confirmed his death but are also in the dark about how he died. They are also aware of the reports circulating on social media that Ismael was the robbery suspect who was killed.

St. Lucia police sources said the force has not yet been contacted by the French authorities in relation to the incident.

Martinique media told SNO today that the dead man is yet to be identified.

However, SNO was told by a Martinique journalist that the Martinique police intend to contact their St. Lucian counterparts for help in identifying the body.

According to Martinique media reports, on Tuesday, November 3, after 5 p.m., a man, believed to be about 25, and armed with a handgun, broke into a hair salon in Dillon, Fort de France.

He reportedly yelled at the occupants of the salon and demanded valuables, particularly money, mobile phones and jewelry. The robber allegedly threatened customers.

However, one of the customers who was assaulted – a 74-year-old man – retaliated by stabbing the robber during an alleged altercation.

It is not clear what type of weapon was used to kill the suspect. One media reported that a pair of scissors was the deadly weapon while another said it was a knife.

The robber was pronounced dead “officially” by a medical doctor at 6:12 p.m., one media house reported.

The same media entity reported that it was difficult to identify the dead suspect because at the time he had no identity papers in his possession.

Reports are that the man who inflicted the fatal blow, was taken into police custody. It is not clear if he will be charged as numerous eyewitnesses claimed the man acted in self-defense.