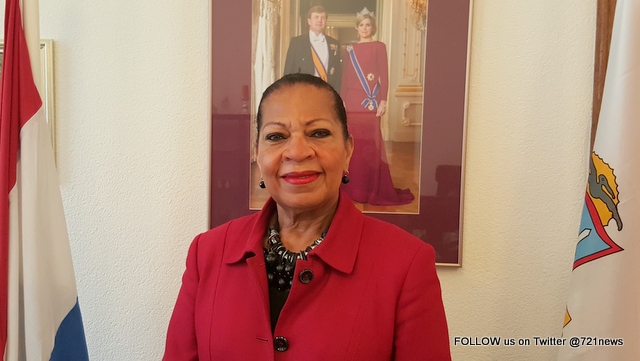 “I, Josianne Fleming-Artsen arrived in the Netherlands as your Minister Plenipotentiary late December of 2014 with a plan. A plan that would bring structure to the cabinet and good representation and build better relations with the Dutch Government and community for Sint Maarten, and whenever and where possible encourage new investment possibilities that would help diversify our country’s economy in the future.

“A plan that would bring the people and students of Sint Maarten in the Netherlands closer together but also assist them in organizing their lives and coming together to share issues and build relations.

“A plan of culture, education and youth affairs where students could embrace their roots and be motivated to be the best that they can be. A plan that would involve respect, dignity and integrity, knowing that these values would be the foundation by which the staff and I operate and through which we would be known and respected. A plan that would bind staff and people together. Being the Voice for Sint Maarten at the Kingdom Council meetings requires knowledge, keenness, and sharpness to gain respect among colleague kingdom ministers and represent your country with dignity, and for this also the mastery of the Dutch Language is essential.

“In the world of Plenipotentiary one must have an international perspective and be open for discussions with many cultures and nationalities, broaden horizons, and make retrospective contributions.

“I want to thank the people of Sint Maarten and in particular the UNITED PEOPLE’s Party, and my colleague members of the Gumbs’ Cabinet who gave me the opportunity to serve at my BEST. It was a mission of diplomacy, relations-building, networking, flexibility, envisioning, creating, representing at all times, and connecting.

“The challenges of INTEGRITY and FINANCE are real and the Council of Ministers have done a great job in dealing with these matters. Thank you Prime Minister Marcel Gumbs and all Ministers for your instructions and support so that my representation for Sint Maarten at the Kingdom Council of Ministers and elsewhere were on point.

“I want to thank my staff for doing a professional job: Perry Geerlings, director; mr.Maarten van Rooij, Legal Council; Carol Voges, Finance and Economic Affairs; Margie van Gijn, Protocol, Knowledge, PR; Kelly Busby, Education, Culture, Youth Affairs;Javier Badaracco, Archives, Social, Consular Affairs. This staff has become a team of Professionals and I am so proud that I could be part of this transformation. Together we have learned so much from each other and I leave them with a heavy heart but happy to provide a professional team to my successor.  Congratulations staff.

“Being the former Deputy Minister Plenipotentiary, and the Minister Plenipotentiary have allowed me almost two and a half years in the Netherlands, which has been such a great opportunity to stand up and represent my country in so many perspectives, at so many levels, with so many different cultures, encompassing all the various dossiers of all the Ministries, ensuring that there is only one main goal that Sint Maarten at all times stands out. I am satisfied with what I have achieved.

“Thank you Sint Maarten for this great diplomatic opportunity!”