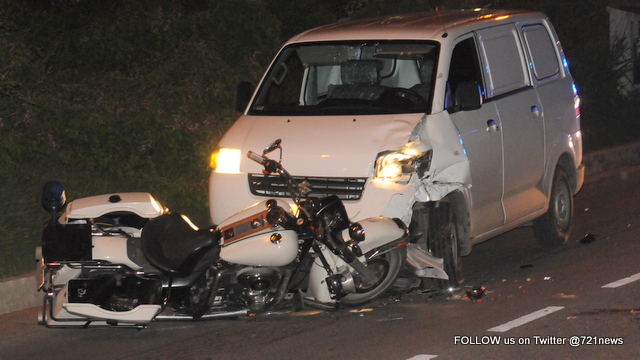 The police traffic department is presently investigating a serious head-on collision involving a motorcycle police officer and a small van driven by another police officer.

The call came in to the Emergency Dispatch Center around 08.45 p.m. on Sunday October 15th, informing them of the collision which took place on the L.B. Scot in the vicinity of the Sheik Supermarket.

The call also stated that the motorcycle officer was severely injured and needed immediate medical attention. The female occupant of the van driven by another police officer suffered a small wound to her head which also needed medical attention.

The scene was closed off and traffic in and out of Sint peters was diverted for the emergency services to attend to the victim and conduct an investigation. Both victims were treated on the scene by paramedics and then transported to the Sint Maarten Medical Center for further treatment.

The doctors stated during treatment of the motorcycle officer that his left foot was seriously damaged and partially severed and that he would need immediate surgery. After coming out of surgery the doctors stated that the condition of the officer was stable and would recommend at a later stage if he would flown abroad for further medical attention.

The police traffic department is conducting an in depth investigation to determine exactly what caused the accident. As more information regarding the condition of the officer becomes available the media will be informed.

PHILIPSBURG, St. Maarten – A senior Police Officer was rushed to the St. Maarten Medical Center (SMMC) on Sunday evening due to injuries that he suffered while riding his assigned police motorbike.

The officer has been identified as Mayor Ranis.

It is said that the officer collided with a van and as a result of this, he lost the lower part of his foot.

According to eye witness, the officer over took a car but was unable to fully complete the maneuver due to an on coming mini van which managed to stop before the officers motorbike slid into the front of the vehicle.

The accident took place at approximately 8:45pm on the L.B. Scot Road in the vicinity of the former Sheik Supermarket.

The Officer was rushed to the SMMC by ambulance. 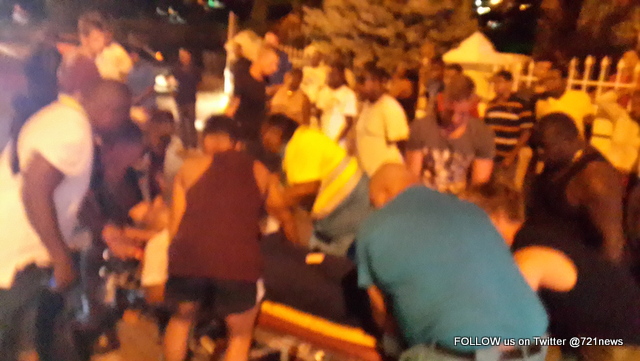 *** Caution Video has strong and obscene Language ***
It should also be noted that Police Officer Chandler  again abused his authority by grabbing Gromyko Wilson 721news reporter phone as he was covering the bike accident scene. In a previous incident the same Officer arrested Wilson for no reason. He was released after the Prosecutor ordered this without any charges being filed.
The KPS internal affairs Dept. also refused to take Wilson statement when he wanted to file a complaint of police brutality and abuse. This is pure Police abuse on a continuous basis towards a media worker who executing his job Wilson noted.