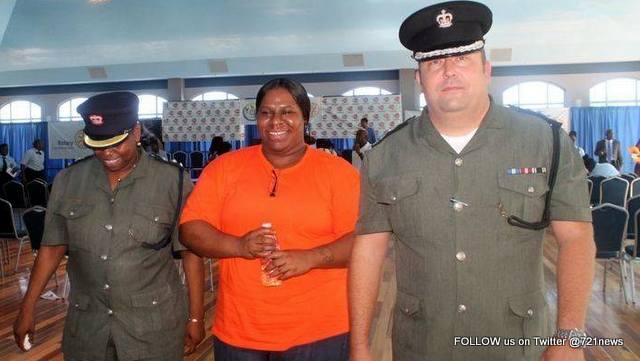 ROAD TOWN, Tortola, VI – Superintendent of Prisons Mr David Foot has disclosed that a woman who is serving time at Her Majesty’s Prison (HMP) in Balsam Ghut for manslaughter has been granted parole.

Mr Foot was at the time addressing the launch of the 2015 edition of Follow the Movement’s (FTM) ‘show Love’ seminar for fourth and fifth form girls on October 8, 2015. Some 280 girls from schools across the Virgin Islands, with the exception of students from Anegada, will be attending the seminar slated for Thursday October 15, 2015 at UP’s Ballroom in Road Town.

“The lady that was with me last year has been successful in being granted parole,” Mr Foot said of Ms Shanoviah Thomas, who addressed participants of the seminar last year.

The Superintendent of Prisons further said Ms Thomas is the only one to have been granted parole at the first sitting of the newly instituted Parole Board. “And well deservingly so,” he said.

It is this news site’s information that the Board is set to sit again sometime later this month.

At last year’s session, Ms Thomas gave the harsh reality of prison life for a woman. She also blasted prison officers for allegedly stripping inmates of their human rights and heavily victimising inmates without just cause.

“Up there is college… what you don’t know you will learn,” Ms Thomas had warned.

Thomas was sentenced to ten years for manslaughter by reason of provocation involving a domestic violence matter.

The theme of the one-day seminar is ‘Show Love’ and would see a number of influential figures in the territory imparting knowledge that can help shape the participants future in a positive way.

Participants of the Show Love seminar will also hear from keynote speaker Ms Kimberley Ritter, formerly of Safe Zone in St Thomas but now with Tortola Concrete. Miss Ritter is passionate about being an inspiration to young women, especially with her background of being a counsellor at the prison level, although on a more international scene.