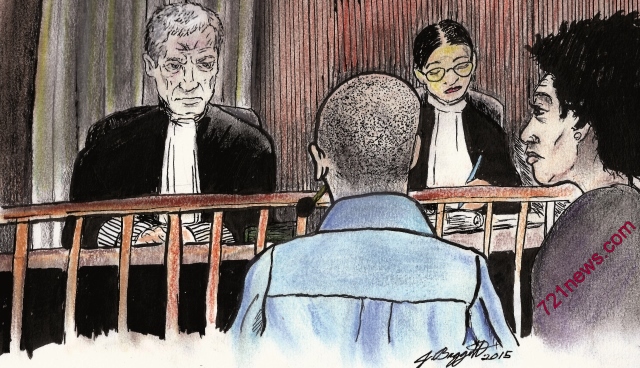 By the Today Newspaper

GREAT BAY – Public Prosecutor Gonda van der Wulp demanded a 12-year prison sentence for suspended Police Officer Richmer Michel Patrick Y., for the fatal shooting of Akeem Isidora on March 4 in Belvedere. The date that the judge will decide about the sentence is set for November 18.

Y. who is suspected to have shot Isadora with his service weapon, told the prosecutor and judge that he felt threatened by the victim, his brother Gilbert and some others. At the time of the shooting, Y. was carrying two different fire arms with him in the car. His service weapon and a blank cartridge pistol that was specially modified.

Prosecutor Van der Wulp told the court that research and testimonies from a number of witnesses proved that the shooting was in no way an act of self-defense. “It was clear and very obvious that there were problems between the victim and the defendant earlier that day,” she said. Y. showed the victim his service weapon while saying, “One of these bullets has your name on it.” The defendant also had sufficient opportunity to drive away from the situation, but he did not. Instead of driving away he stayed at the scene while he could have avoided the situation, the prosecutor stated.

According to the prosecutor Y.’s girlfriend (V.) who is a customs officer, changed her testimony about what happened that day a couple of times. In her last testimony her story matched the story of other witnesses. Y.’ girlfriend even asked why he was creating more problems instead of solving them.

The prosecutor told the court that Y. did not act like a police officer, because he did not follow the protocol that he learned while he was being trained to become a policeman. Y. joined the police force in 2011, and after successfully finalizing his training program he became a police officer in 2013. In 2014 Y. joined a special unit of the police, and he was involved in a number of shootings while on duty.

Research by the Dutch Forensic Institute NFI and different testimonies concluded that the victim died of a fatal shot in the area of his heart. The shooting occurred after Y. dropped of his girlfriend V. who lived next to the victim. The victim, his brother and another guy surrounded Y’s car and started tapping on it and started shouting at Y.

Y. felt threatened and after the victim opened his door, Y. shot him without a warning. Research and testimonies show that before Y. fired the shots, he called his superior Mr. Franse to ask for assistance. Seconds after that phone call the shooting took place. According to the prosecutor the victim was shot between 7.13 and 7.14 p.m.

The judge asked Y. a number of times why he did not drive away from the scene, and why he shot the victim instead of trying to de-escalate the situation, like he learned in his training program to become a police officer. Judge Smid even asked Y., why he did not fire a warning shot. Y. answered that he did not see any other way out than the one he chose. He also added that if he would have had another opportunity to find a solution, that he would haven chosen for that.

But Y. again explained that he felt very afraid and threatened by the situation that took place on March 4 in the vicinity of Belvedere. He also said that he felt afraid because the victim was grabbing with his hand under his hoodie, and he thought that he was about to get killed, because Isidora had threatened to kill him in an earlier stage.

Y. also added that the victim’s brother was waving around a big axe in one of his hands. But the testimonies of witnesses stated that it was not a big axe but a shovel, and that Isidora’s brother was not waving it around.

Y.’s attorney Sharia Bommel tried to convince the prosecutor and judge that her client didn’t belong in jail, and that he should immediately be released. According to her, her client’s personal life was affected by the fact that he was in jail. But the prosecutor objected and the judge refused to release him.

Philipsburg, Sint Maarten — Suspended Police Officer Richmer York had his day in court on Wednesday morning and started his self-defense argument while the prosecutor considered the case proven that it was planned.

York is believed to shoot Akeem Isidora on March 4 after an altercation with him.

The police officer was arrested on May 17 and has been detained. On Wednesday March 4 the defendant sought out Isidora in Belvedere. He was off duty and drove his private car.

Isidora was involved in a stabbing in 2010 that left 22-year-old Otmar Leonard dead. Facing ten years in prison for the stabbing the court acquitted Isidora, who was 17 at the time, of the crime in 2011.

The Minister of Justice was informed about the suspension of the police officer a week after the incident in March and agreed with the move by the police force after assessing the case.

Press Secretary Karola van Nie told 721news after the handing of the case today that, “the demand of the prosecutor was 12 years for manslaughter.

According to the prosecutor it was not a situation of legitimate self-defense. Despite the request of the defense for immediate release, the judge ordered that York will stay in pre-trial detention.

The judge will give his final verdict on the 18th of November,” the prosecutor stated.