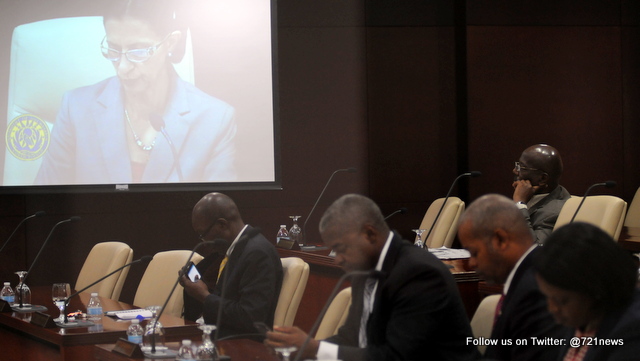 HARBOUR VIEW–The new eight-seat-majority coalition in Parliament formed on Wednesday plans to focus on the needs of residents and is prepared to make safety and security “a top priority” and to give the people of St. Maarten “an open Government that gives account on all levels.”

The new majority was formed after the UP/US/De Weever/Marlin-Romeo government lost its majority on Wednesday when a surprise no-confidence motion was passed by the eight MPs that later formed the new parliamentary majority.

The MPs who form the new coalition said in a Governing Accord that they had signed and submitted to Governor Eugene Holiday on Wednesday an agreement they had reached in principle on the formation of the next Government of St. Maarten.

USP will designate the Minister of Justice.

DP will designate the Minister of Public Health, Social Development and Labour VSA and the new Chairperson of Parliament.

Parties said in the accord that they were “committed to improving the quality of life for all and will support a Government that will operate under the core principles of open government, integrity, improved accountability, transparency, sustainable development, social inclusion, equality and the upholding of the constitution of St Maarten.”

The Governing Accord themed “The time is now” states that the relationship between the government and its entities, especially the Government-owned companies, will be analysed and brought in line with modern corporate governance practices that will include clear lines, separation of authority, accountability and transparency.

“We will support a government that aims to be unified and more effective,” the new majority said in the Accord.

Parties have agreed further to endorse the governing programme “Open and Stable” prepared in September/October of 2014 by NA, DP and USP.

To achieve its vision, the new parliamentary majority said it would focus on five core objectives: Enhancing the quality of life and wellbeing of the people of St Maarten; ensuring good governance; realistic, responsible and balanced financial management; nation building and sustainable development; economic growth and environmental protection.

The signatories to the accord have agreed to meet regularly to discuss any and all relevant matters that may be put on the agenda of the Council of Ministers and/or Parliament. The coalition meetings will include Ministers of Government and MPs supporting the Government. The accord is entered into for the remainder of the 2014-2018 governing period.

Governor Holiday said in a press release late Wednesday that he had received a letter from Richardson, Matser and Lake indicating that they withdrew their support from the UP-led coalition Government.

Holiday said he had been informed that Parliament had passed a motion of no-confidence against the current Cabinet of Ministers on Wednesday, September 30.

He said he also had received a separate letter on Wednesday signed by the four members of the NA fraction, the DP fraction, the USP fraction and MPs Matser and Lake signalling their willingness to form the next Government of St Maarten. The letter included an attached Governing Accord signed by all eight MPs in the new coalition.

Holiday said he had taken this correspondence and “events regarding the current political situation into consideration.”