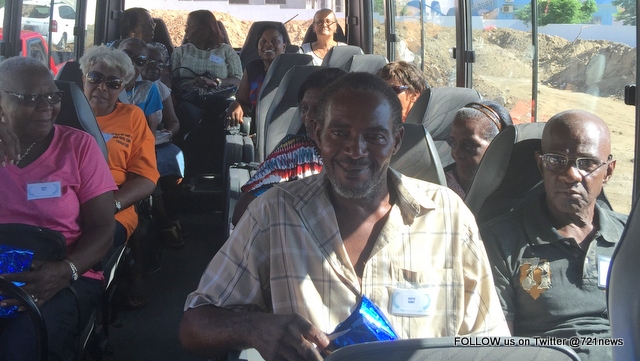 PHILIPSBURG, Sint Maarten – Independent Member of Parliament (MP) Leona Marlin-Romeo treated the country’s senior citizens so they could attend an event for International Day of the Older Persons which was recognized and celebrated globally on October 1st.

Senior citizens on Dutch Sint Maarten were able to be transported to a celebration through the giving back to the community program of Independent MP Leona Marlin-Romeo.

The sponsorship of a coaster bus was given after Meals on Wheels founder Mary Bryson indicated the areas that needed assistance in order for them to make this event a success.

MP Marlin-Romeo attended the event and thanked the elderly for their contribution to Sint Maarten/St. Martin and Anguilla, and encouraged all leaders to remember the elderly as they have paved the way for all of us.

PHOTO CUTLINE: Seniors along with representatives from Meals on Wheels on the coaster bus with MP Marlin-Romeo (back of the bus 2nd from right) on their way to an event to celebrate International Day of Older Persons, October 1st.