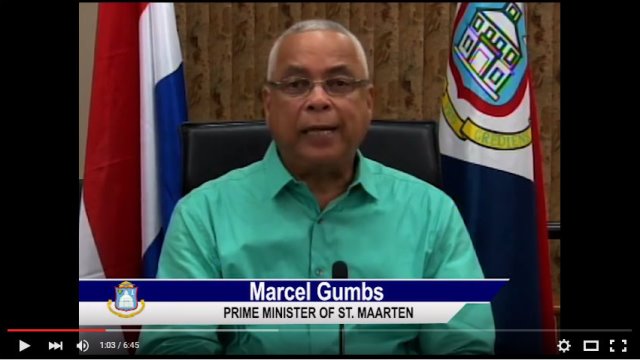 PHILIPSBURG, Sint Maarten – Prime Minister Marcel Gumbs, announced on Tuesday that he has extended an invitation to all parliamentary faction leaders for Wednesday, October 14th at the Government Administration Building.

The agenda point for the meeting is seeking support for solutions for stability in Government.

The first meeting between the Prime Minister Marcel Gumbs, along with his advisors from his Cabinet is slated for 9.00am.  Subsequent thereto, meetings will continue with the faction leaders throughout the day.

As indicated in his first meeting with the Parliament of Sint Maarten, the Prime Minister stressed the need for stability, civility and tranquillity in the country.  Prime Minister Gumbs has requested the various faction leaders to meet in order to discuss solutions for stability in Government.

Invitations from Prime Minister Gumbs to faction leaders were issued on Tuesday, October 13.

The members of the Council of Ministers decided on Tuesday to explore this avenue in seeking a solution to the current impasse that would be in the long-term interests of the country and its people.

“This approach being offered brings Parliament and Government together to work in the interests of the people. I am looking forward to meeting with the various faction leaders as we discuss possible solutions for stability in future Governments of this country,” Prime Minister Marcel Gumbs said on Tuesday afternoon.