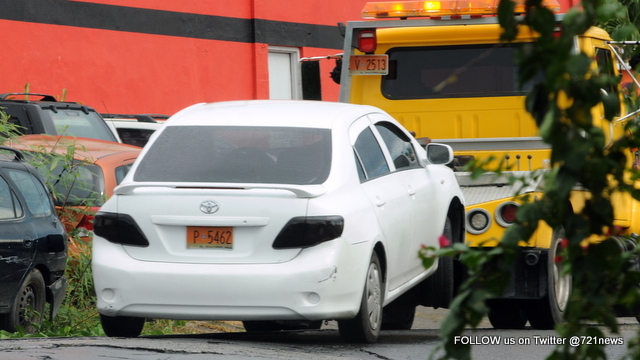 PHILIPSBURG, Sint Maarten – In the morning of October 8 the police got information that an unknown white Toyota car was parked on Hyena road, Cayhill for some days.

The police dispatcher directed a patrol and detective to the scene to see if the vehicle was stolen. On their arrival the police and detective started an investigation to discover who the owner could be.

When the authorities searched the white Toyota corolla P-5462 they found out that the car belonged to someone who is very close to one of the two robbers who got killed a few days before.

The white Toyota corolla P-5462 was towed away from the scene for further investigation.

The day of the robbery eyewitness stated that the car used to flee the scene was the colour of red and that it is presumed that two other person may have left the scene after the two other robbers were shot dead on the spot.

Up to this day the Police or the Public Prosecutor has never issued an official press release regarding the attempted robbery on Pan American truck and how the public may help.

No official information has been released