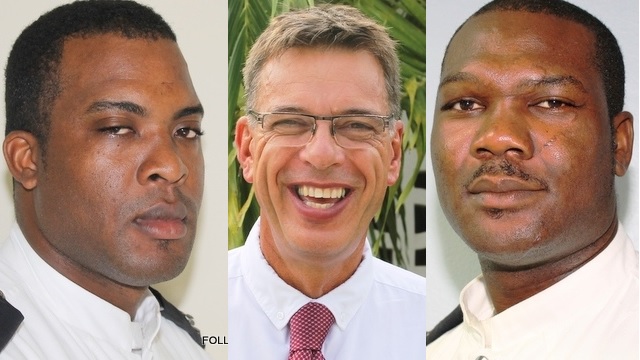 Commissioner of Police, Designate of the Royal Anguilla Police Force Mr. Paul Morrison was this week on island for a familiarization visit of the RAPF and Anguilla.

“I spent quite a bit of my time with the Acting Commissioner of Police and the officers and staff of the RAPF and was impressed with their determination to deliver good policing for the benefit of Anguilla,” said Mr. Morrison.

“My first impressions are of a very vibrant island community that wants a police service it can be proud of and trust to keep them safe.”

“I look forward to October,” said Mr. Morrison,  “Returning and taking up my post so that I can join the RAPF working together with them to shaping the organization to best serve the needs of those who live, work and resort to the this beautiful country.”

Mr Paul Morrison was most recently Chief Superintendent and Head of Operations for Surrey and Sussex Police in England prior to his retirement.

PC Lawford Brown of the Royal Anguilla Police Force was this week commended for his powers of observation, bravery and professionalism.

The incident which occurred in late August saw the successful recovery of an illegal firearm and ammunition and the apprehension of the holder.

The commendation came from Acting Commissioner of Police, Ms. Alice Proctor in a letter to PC Brown dated 2nd September, 2015.

“I think that your bravery and courageous actions are worthy of praise,” said Ms. Proctor.  “Your actions have resulted in the removal of a weapon off the streets of Anguilla, probably saving many lives”.

“Continue to keep up the good work,” said Ms. Proctor.

PC Brown who joined the RAPF in January 2013 is presently attached to the Beat and Patrol Department.

PC Helmet Mason of the Royal Anguilla Police Force was this week commended by a tourist for a job well done.

In an email received by Acting Commissioner of Police, Ms. Alice Proctor the author remarked,

“PC Mason is a great representative of the Anguilla Police Force for a tourist in distress, by the way PC mason helped me out at Blowing Point when I thought my rental car was stolen.”

“I just thought I’d let you know that you may convey my appreciation to his superiors,” concluded the email.

PC Mason who is attached to the Blowing Point Police Station has been a member of the RAPF since June 2006.