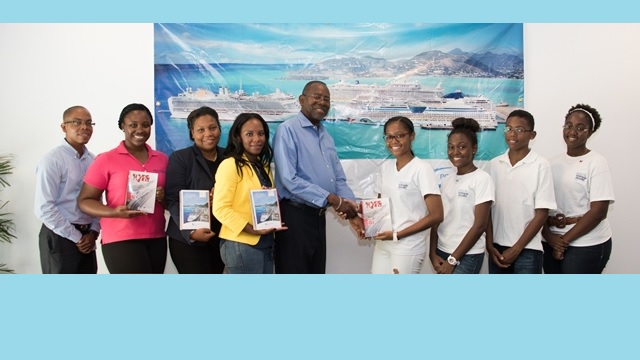 PORT ST. MAARTEN – Port St. Maarten continued its solid commitment to education and the youth of St. Maarten with a major donation of 500 HYPE Agendas 2015-2016 for high school students in the country.

In addition to covering the cost of 500 Agendas which were distributed to students to use; the Port has also supported the HYPE Agenda in several other ways, including gracing the back cover of the Agenda this year.

Port St. Maarten management says education is the future of St. Maarten stressing the importance of an education in order to keep the country moving ahead whether it’s at the port or in other sectors of the economy.

“Port St. Maarten has been active in the area of education over the years and will continue to do so.  The port cooperates with school tours where the students get the opportunity to learn about the port in operations and about the career opportunities that exist.

“The Port has supported the HYPE Agenda since its inception and in this edition we have a full page advertisement which points out the various careers in and around the port.  There are so many jobs that are directly and indirectly linked to our national port,” Port Management pointed out.

HYPE Coordinator Zulayka Peterson said the Port has been a major contributor to HYPE since the first one was produced in 2008. The Port has continued its commitment by supporting the initiative and ensuring that large numbers of students get Agendas in 2010, 2013, 2014 and now again in 2015.

“Port St. Maarten was one of the first organizations to come on board as a sponsor for the HYPE Agenda, when we first started this project, and they have continued with their unwavering commitment to ensure that the HYPE Agendas are in the hands of our young people in schools,” Peterson said on Monday.

“Thanks to Port St. Maarten 500 students from Milton Peters College can now use this educational product in the classroom this year. We are very happy about this because creating a solid future starts by making sure that our young people are given the tools needed to make their process of being educated smoother.”

The Agenda was produced locally and is themed: “The journey travelled to achieve one’s goals.”

Peterson thanked the Harbour for putting Agendas in the hands of students in the country and by extension helping young scholars remain organized during the academic year.

The Agendas are tailored for the months that cover the school year making it a useful item for students to use for education reminders such as noting down their assignments, projects, homework and other school related things. Also included are useful information such as school vacation dates and study financing information.

The Agenda was produced by a team, which included a group of students from the various high schools in St. Maarten. These students were actively involved in the production process and they determined the information they want to see reflected in the Agenda. They went out and conducted research and wrote most of the enlightening articles and profiles that appear in the Agenda. The articles reflect the general theme and they relate to the youth.

Numerous young and adult role models from right here in St. Maarten as well as from Saba, St. Eustatius and internationally are featured throughout the Agenda, including our past and present national heroes.