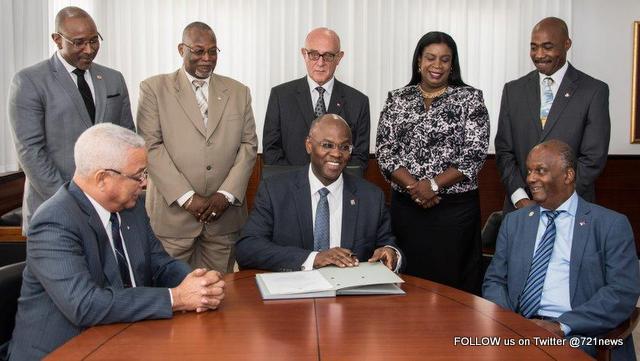 PHILIPSBURG, St. Maarten – On Monday afternoon two persons took the oath of office at the Governor’s Cabinet and became the latest addition to the St. Maarten Council of Ministers.

The oath taking ceremony was held at 3:30pm and taking the oath was Mr. R.A. Boasman as the new Minister of Public Health, Social Development & Labour.

The other new Minister is that of Mr. Ernest V. Sams as Minister of Tourism, Economic Affairs, Transport and Telecommunication.

Speaking to our news room both Ministers Sams and Boasman indicated that they were ready for the work ahead.

Minister Sams stated that there are many things that they have in-store to do and that they will be doing just that.

At this early stage of their appointment they did not venture into any details. Minister Boasman stated that now the works starts.

More can now be heard via PodCast