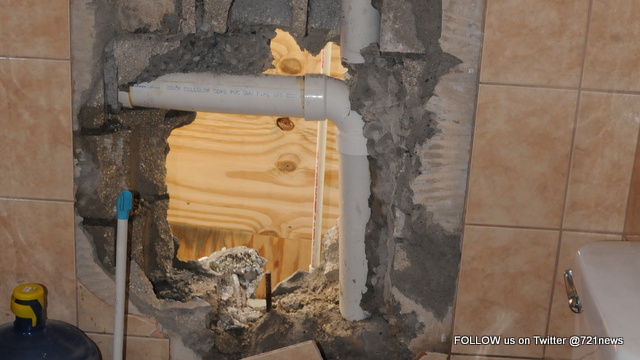 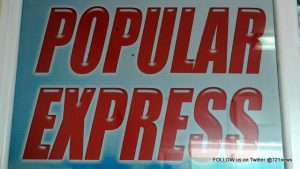 According to reports, bandits gained entry into the establishment which is located on the Cannegieter Street across Nagico Building, during the early morning hours of Monday. It is believed that the robbers gained entry some time around 2am.

In order to gain entry they punctured a hole in the wall at the back of the building housing the money transfer business.

Up on gaining entry they virtually ransacked the business space, damaging a water pipe and other office equipment.

After all of the damage they caused it is said that they may have only gotten away with $200 in cash. 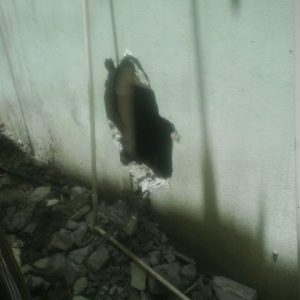 Worker of Popular Express could have been seen during the morning hours in-front of the business establishment pushing and mopping water, water that had been released by the robbers when the broke into the business.

A clothing boutique nearby also suffered damage as a result of the broken water pipe. They too could have been seen pushing out water that had also made its way into the business.

The police visited the scene of the crime Monday morning and is now conducting an investigation.

On August 21, 2015 Pondfill Supermarket also suffer from a similar break in. Read the Today Newspaper Story published on August 22nd 2015

GREAT BAY- Grocery store Pondfill Food Market, located in the Van Grieken  Building, was robbed Friday morning at about 2 a.m. by bandits who made a large hole to the side of the building. Storeowner Jose L. opened his grocery at 7 a.m.and noticed that several items were missing, including a cash register. To his surprise, he found a large hole in a sidewall.

“I walked in and noticed that some stuff was missing. According to my cameras, two men wearing masks ransacked the store and looked for valuable items. They took my cash register with money in it,” said the owner. He immediately called the police and officers got to the scene at 9 a.m. The policemen told the owner to wait for the detectives to arrive.

Up until press time detectives had not shown up store. The owner started to cover the hole with cement after hearing that Hurricane Danny is on its way and should be here by Monday. “I am not waiting on anybody to safe guard my store, I waited so many hours for detectives to come and nobody shows up. Best thing to do is to cover the hole and continue with my day,” said the owner to this newspaper yesterday afternoon.

Acting Police Spokesman Steven Carty was asked about the robbery and said that he was aware of it however he is waiting for the full police report before commenting. The store opened at 8am and was closed after 4pm according to the store owner. The video of the robbery is still in the possession of the owner and they await the detective department to make contact for the investigation to begin.