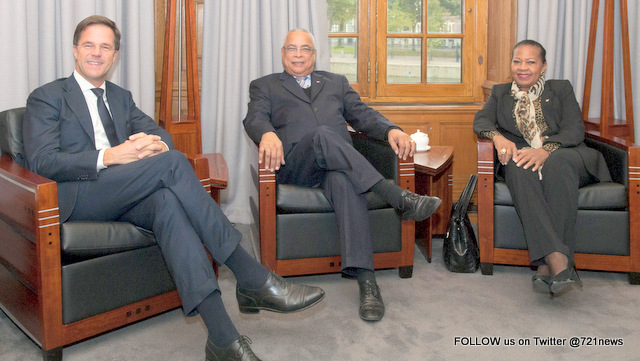 PHILIPSBURG, Sint Maarten – Prime Minister Marcel Gumbs meeting with the Dutch Prime Minister Mark Rutte last week during his working visit to the Netherlands, was an opportunity to discuss pertinent issues related to the relations between both countries within the Kingdom, Minister Plenipotentiary Josianne Fleming-Artsen saidon Tuesday.

“Prime Minister Gumbs touched on all the current issues related to the country, and specifically regarding the Integrity Chamber and the instruction related to financial matters.

“Prime Minister Rutte responded with great respect.  The tone of the discussion was cordial, and Prime Minister Gumbs put his points on the table elaborating on the issues of concern to him and where we could move forward together.

“Building relations cannot be carried out from a distance when there are serious concerns.  There must be a bilateral conversation.

“The trip to the Netherlands where Prime Minister Gumbs met with various institutions can be termed a success, and it is clear that the challenges can be solved through regular and open communication,” Sint Maarten’s Minister Plenipotentiary Josianne Fleming-Artsen said on Tuesday.