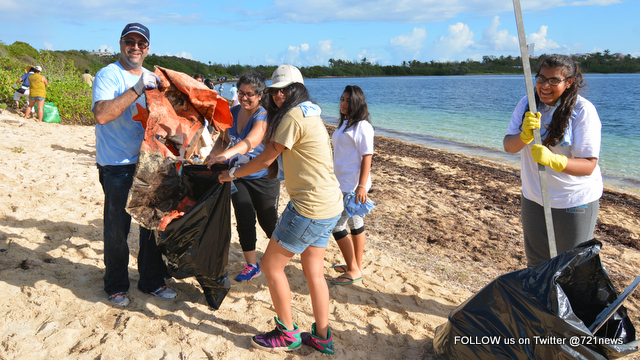 NETTLE BAY, St Martin — On Sunday September 20 a crowd of 416 enthusiastic nature minded volunteers showed up at the Le Sands/Dreams property on Nettle Bay to volunteer for the 2015 International Coastal Cleanup.

The volunteers consisting of individuals, high school students, social groups and business employees who showed true dedication in helping to solve our marine environment for this annual event spearheaded by the Ocean Conservancy.
The local leg of the ICC is organized and coordinated by the Dutch side environmental foundation The Sint Maarten PRIDE Foundation and the French side hiking group SXM TRAILS.
Volunteers ranging from the several businesses on the island were in full force wearing their companies T-shirts to show their team spirit, represented were KOOYMAN, Garnier, Fedex, DOTCOM Mktng, Rotaract Sunrise, Be The Change Foundation,  Sxm DOET, Simarc, We Can Give Foundation, Tzu Chi, Rotary Club from both sides of the island, Les Fruits de Mer, Filipino Community of Sxm, EPIC, Interact Club of SDHS and many students of St. Dominic, CIA and Learning Unlimited.
For the 3 hours beach cleanup exercise volunteers combed the secluded beach which has a difficult access due to the bushy vegetation on the coastline, volunteers still managed to collect 153 bags of trash weighing  5193 pounds! This amount does not include the large debris found such as ironing board, bath tub, fridge, beach chairs, signage, and lots of plastic buckets.
Since this beach is not used for recreation, It is very clear to determine that this sort of trash found is washed up from the currents in the oceans.
A very large amount of trash from the Maritime Industry was found, buoys, large ropes, nets. However the largest item found was the ubiquitous plastic bottle. All shapes and sizes.
Difficult to determine if this sort of trash was dumped from boats, maritime industry, or dumping activities on land.
The International Coastal cleanup offers volunteers to play scientist for a day by recording every piece of trash collected. This is added on a special data card and total results will be sent in the coming weeks to Ocean Conservancy.
“Volunteers have collected data since 1986, and the numbers are used to raise awareness, identify hotspots for debris or unusual trash events, and inform policy solutions.”~Ocean Conservancy
The PRIDE foundation thanks our sponsors who have been donating to this event annually.  Zeebest , Cake House Bakery, Heavenly Water, Kooyman, Mediocosmetic , PRIME distributors and J&B Brothers.
We also thank Le Sands/Dreams Restaurant, the French Municipal police, and the St. Martin Collectivite for their assistance .