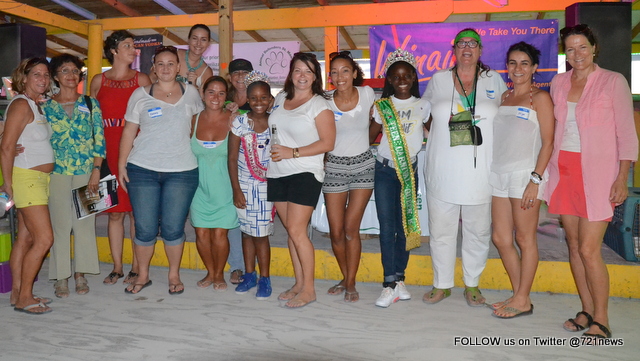 PHILIPSBURG, Sint Maarten — The Animal Defenders Foundation held a successful Doggie Bingo last Saturday, where some 300 animal lovers from all walks of life attended to raise funds for animals on the island; “The Doggy Bingo and Adoption Drive was an overwhelming success. We had an excellent Bingo caller Sylvia Fromstein and an excellent MC Jennifer Carty who entertained and informed an excellent turnout of about 350 people,” commented Animal Defenders President Mercedes De Windt.

The Funds raised during last week’s Bingo will go towards the Animal Defenders Animal Care Day to be held on the fourth of October on World Animal Day, where professionals in the animal field will inform pet lovers how best to take care of animal family members giving information on what to feed and what not to feed; the importance of grooming, nail clipping and other hygiene and health issues. Pets at the event will also be able to get a free dip or other flea and tick treatments for a significantly reduced price. “During the Animal Care Day it is also our aim to have the pets vaccinated and have their caretakers pledge to spay or neuter their pets. This will also be possible thanks to our sister foundation St. Maarten Animal Welfare who has always supported us tremendously. Both foundations wish to see and work hard on solving the animal overpopulation problem we have on Sint Maarten, so the funds raised with the bingo event will go towards the vaccinations and spay/neuter operations and after care, “continued De Windt.

During last Saturday’s event there was one kitten adopted and the Foundation is now in the process of having two additional animals adopted. If anyone is interested in adopting a pet all animals can be seen on the Animal Defenders SXM Facebook Page; “The animals on our Island are lucky to have such heartwarming and dedicated volunteers working for them. Animal Defenders has four feeding teams at four different locations but it would be great if more teams of feeding volunteers could be set up in more districts on our island. We could also use more foster parents for the dogs until we find them a permanent home,” concluded De Windt.