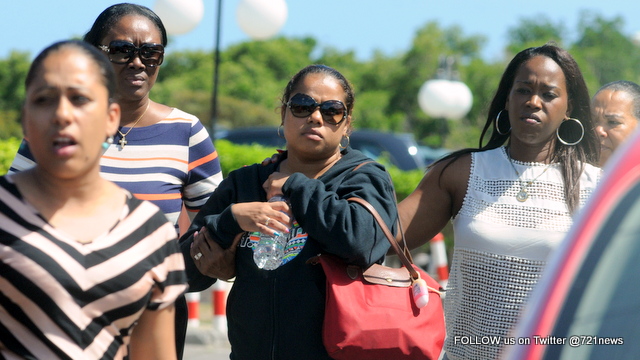 PHILIPSBURG, Sint Maarten — Meanwhile the Police Spokesman Inspector Ricardo Henson confirmed Saturday afternoon that Officer Gamali Benjamin left the land of the living on Saturday. A full statement can be expected from the Police later during the day.

Reliable sources told our newsroom that Officer Benjamin elapsed after 1pm at the St. Maarten Medical Center (SMMC) where he was placed on life support.

PHOTO: Karena Benjamin (center) the wife of the slain police officer Gamali Benjamin is seen leaving the St Maarten Medical Center after her husband left the land of the living on Saturday.

PHILIPSBURG, Sint Maarten — On Friday August 7th, in the afternoon, an arrest was made in the case of the ‘Oro Diamante robbery’, the case in which our beloved colleague Gamali Benjamin was shot.

A 25-year old male was arrested by members of the ‘Multi Disciplinary Investigation Team’. This team consists of members from the Federal Detectives (Landsrecherche), the R.S.T. (Recherche Samenwerkings Team) and KPSM and it’s handling the robbery case.

The 25-year old man was arrested because he’s suspected of his complicity in this case; he tried to get rid of evidence which could be important for the detectives to solve this case.

He was taken to the police station in Philipsburg where the public prosecutor decided to put him into custody for the time being. He will be questioned by members of the Multi Disciplinary Investigation Team.