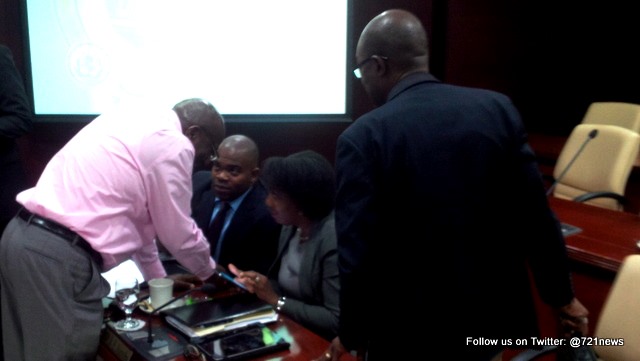 PHILIPSBURG, Sint Maarten — The Central Committee meeting of Parliament held on Monday was convened as a closed meeting by the Chair of Parliament to discuss with the Council of Ministers the rise in crime on the island culminating in the shooting and subsequent death of Officer Gamali Benjamin by alleged robbers of a jewelry store.

Faction members of the NA and DP did not immediately protest this in order to give Government the benefit of the doubt as it pertains to the sensitivity of the information being shared and possible ramifications it may have on the outcome of the case.

Information shared by the COM, however,  was not such that the public needed to be sheltered from the reality.

Many MPs touched on preventative measures and made recommendations, especially in the area of regulations for scooters, measures for communities outside Philipsburg,  parenting, labour situation, the economy  and other societal ills plaguing the community.

We were quite concerned about the financing for many of the proposed changes, including hiring some 30 police officers needed to bring the force up to the minimum level of functioning.
We firmly believe that we are very late in  reacting to violent crimes now, while we should have seen this coming 10/15 years ago.

A neglected society will surely breed ill will, lack of compassion, blatant disrespect and the types of behaviour we have come to accept as “normal”.

Some questions asked were:

There were repeated calls on government for open communication with the public to put an end to speculation. Of late,  most meetings of interest to the public are being held behind closed doors which defeats the purpose of allowing the public to know first hand.

Justice Minister Richardson was advised on the importance of sitting with the police officers to hear their challenges and be open to address them as they continue to work under less than favorable circumstances.

The call was repeated to not allow Officer Benjamin’s death be in vain. The meeting is scheduled to continue on Friday August 14, 2015 when Government is expected to provide answers.