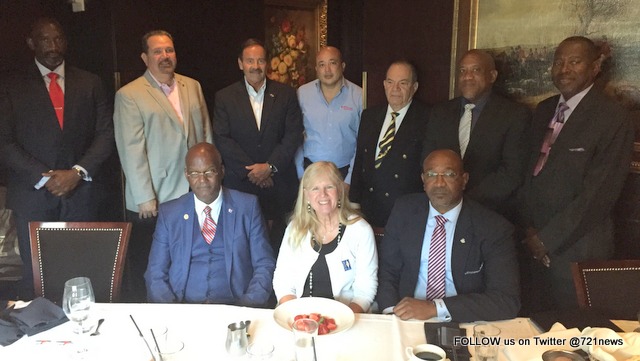 The FCCA praised St. Maarten’s handling of the incident especially from a communications perspective. FCCA was very appreciative of how the Government of St. Maarten and Port management were immediately in direct contact with the FCCA and keeping them abreast of developments as they happened.

The FCCA Security Committee was given an update about the armed robbery incident of August 5, 2015 based on the investigation carried out by law enforcement.  The armed robbery led to the death of Police Officer Gamali Benjamin when he responded to the call.

The follow-up actions by the Government of St. Maarten were explained especially the seriousness of the approach of the Government and the country’s highest legal body, the Parliament of Sint Maarten, to ensure that enhanced security measures are set as high priority for the public and visitors.  The briefing was given by Minister of Justice Dennis Richardson and Acting Chief Police Commissioner Carl John.

The FCCA President and Security Committee were once again assured that safety and security is priority number one for the Government of St. Maarten.

The ports security plan which includes cooperation with the Police Force was also discussed at length where an update was given about initiatives to be developed.  This also includes the camera surveillance network for the Philipsburg area.

More resources will be given to the Bike Patrol and further deliberations will take place between the Ministry of Justice, Police Force, Port Security and the Safety Officer.  The aforementioned will be tied to the expansion of the created Soualiga Patrol.

A follow-up meeting will take place at the FCCA Conference in Mexico in October.  A draft security protocol will be reviewed by the Ministry of Justice and the Ministry of Tourism, Economic Affairs, Transport and Telecommunications (Ministry TEATT), and will be discussed in detail with the FCCA at the aforementioned conference.

Another important issue discussed were employment opportunities onboard cruise ships; more commercial support for selling island products onboard cruise vessels; and social programs such as the FCCA Crime Social Project.  With respect to the latter, there are a number of successful programs that were highlighted in the meeting about initiatives in Panama, St. Lucia, and St. Vincent and the Grenadines.

Minister of Tourism and Economic Affairs Claret Connor discussed job opportunities onboard cruise ships which is a program established by the FCCA as well as the FCCA Crime Social Project.  These initiatives he deems very important and could contribute to the overall socio-economic development of St. Maarten.

Minister Connor added that the information received at the meeting he will discuss with the Minister of Education, Culture, Youth and Sports Hon. Rita Bourne-Gumbs, School Management and Educational Institutions in order to ensure that a program which is developed in collaboration with the FCCA is successful and sustainable.  Minister Bourne-Gumbs is also Acting Minister of Labour Affairs.

The opening up of Cuba and the interests of cruise lines was another topic that was discussed between Paige and Port management.

The St. Maarten delegation was also briefed about the cruise line protocol that they have in place in the event of an incident involving a cruise passenger.

Another topic that was discussed is the new BREA (Business Research and Economic Advisors) report which will be published shortly and presented at the FCCA Conference in Mexico.

Destination St. Maarten has improved its position when it comes to cruise passenger and crew spending.  The report studied the economic impact of the FCCA Member Lines to cruise tourism throughout the Caribbean.