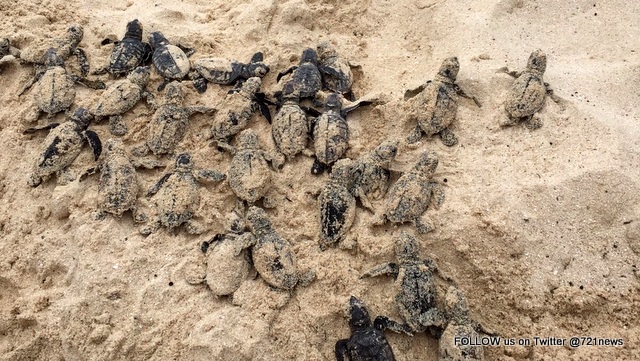 DAWN BEACH, Sint Maarten — An endangered Hawksbill Sea Turtle nest hatched on Friday at Dawn Beach with some 130 hatchlings emerging from the monitored nest successfully making their way to the sea. The St. Maarten Nature Foundation was contacted by Westin Security Staff alerting that the nest was hatching. Nature Foundation Chief Ranger Etienne Lake, Office Manager Marisa Dyer-Brandy and Intern Riddhi Samthani provided support for the hatchlings headed to see and provided information on sea turtle conservation to the spectators on the beach.

This marks the fourth Sea Turtle Nest that has successfully hatched during the 2015 Sea Turtle Nesting Season, which saw some 400 hatchlings making their way to the sea. Of these only twenty may survive.

“The community has played a key role in assisting the Nature Foundation in managing Turtle Nesting Areas and adhering to the laws regarding the country’s Sea Turtle population. Although this nesting season is slow, we have booked some good results with the help of the local and scientific community during this year’s nesting season,” commented Tadzio Bervoets of the Nature Foundation.

The Nature Foundation, as designated focal point for Sea Turtle Conservation according to the Inter American Sea Turtle Convention, the SPAW Protocol on Endangered Species and Country Representative for the Wider Caribbean Sea Turtle Network has received specialized training in Sea Turtle conservation, including nest monitoring and hatchling conservation.

Based on ARTICLE 16 and 17 of the Nature Conservation Ordinance St. Maarten it is illegal to kill, wound, capture, pick-up, have animals that belong to a protected animal species, to directly or indirectly disturb their environment resulting in a physical threat or damage to the fauna or to commit other acts which result in disturbance of the animal.

The foundation not only manages the sea turtle population but also protects their endangered habitat and nesting and foraging grounds in sea grass beds and nesting beaches during sea turtle nesting season.