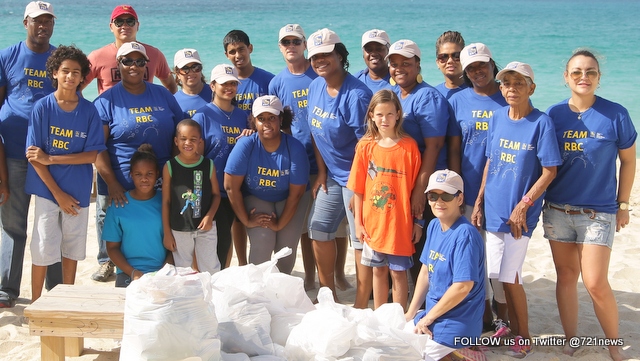 Philipsburg –over 20 RBC Volunteers gathered in the early morning on June 20 at Simpson Bay Beach to start the RBC volunteer beach clean-up, aimed at helping make the turtle nesting area on that beach more accessible for the endangered Hawksbill, Leatherback and Green sea turtles which nest on Simpson Bay Beach. These sea turtles have made it their nesting beach in the period from March to November each year.

The beach clean up was organized in conjuction with Nature Foundation St. Maarten (NFS), and initiated in connection with the “RBC Blue Water Day 2015 Project”  which is the environmental priority program for RBC Royal Bank focusing on the preservation of the world’s most precious natural resource: water. RBC in St. Maarten has been committed to clean Guana Bay in the past and now Simpson Bay for the duration of the turtle nesting season from March till November each year and commits to support with building awareness on sea turtle nesting

The clean up delivered included garbage with plastic debris and litter. RBC Royal Bank supports the awareness building on the topic of turtle nesting and the preservation of a clean beach for humans and turtles specifically. This project of cleaning up the beach for the turtle nesting season fits perfectly into RBC’s philosophy on the sustainable development of the environment. RBC Royal Bank firmly believes that it is the responsibility of the bank to positively influence the social development of the community in which it operates by maximizing its contributions to the state of environment of the island.

The Nature Foundation would like to commend and thank RBC and especially the volunteers for the hard work they did on Saturday morning. St. Maarten is one of the few territories in the Caribbean where turtles come up the beach to lay their eggs.Through the excellent work done by RBC volunteers the beach is now clean for nesting turtles to lay their eggs.

By means of this environmental  initiative RBC Royal Bank moreover wants to add value to its environmental footprint in the St.Maarten community and most importantlty demonstrate the bank’s commitment to the development and preservation of the environment of the island through the active engagement of its employees.