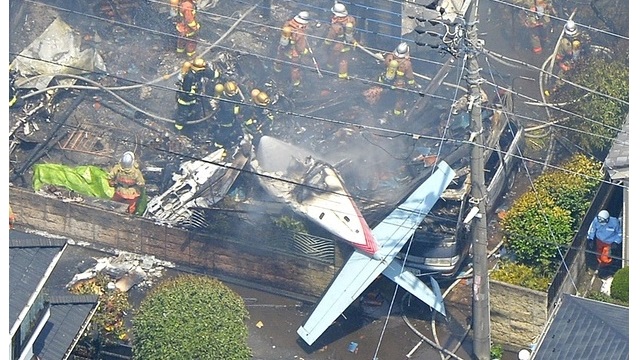 Tokyo Fire Department officials said the three suffered heart and lung failures. Five others were taken to hospitals but their conditions were not immediately known.

It is unknown how many people were aboard the plane. However, NHK, quoting police, earlier said two people on board and one female local resident were killed in the accident.

Police said the cause of the crash was not immediately known. The neighbourhood is about 500 metres from the airport used by small aircraft.

At least three houses and two cars were on fire in the capital’s residential district of Chofu near the airport, and the crash also damaged the roofs of other houses nearby, according to the spokesman and local media.

A witness told NHK: “I thought it was flying quite low.”

Television footage showed firefighters battling the blaze, and showed the remains of the plane’s tail.

Agence France-Presse and Associated Press contributed to this report