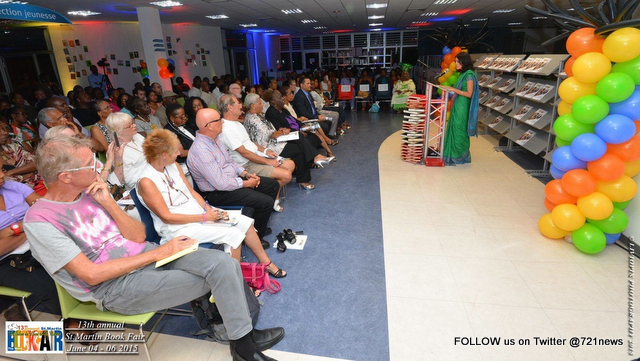 GREAT BAY, St. Martin (July 26, 2015)—The Adulterous Citizen by Tishani Doshi, the award-winning writer from India, has already gone half way around the world since its Caribbean publication here in June 2015.

House of Nehesi Publishers (HNP) launched the new book of poems, stories, and essays by Tishani Doshi at the opening ceremony of the St. Martin Book Fair, attended by over 250 guests, said HNP president Jacqueline Sample. Poet and novelist Doshi was the keynote speaker at the 13th edition of the island’s literary festival.

The Adulterous Citizen: poems stories essays has also accompanied Doshi to Europe for a July 2 reading, conversation, and book signing in London. The champagne-toast affair at the Shangri-La Hotel’s Cultural Salon, was part of what the organizer called “an exciting new experience for guests, visitors and local Londoners.” http://www.shangri-la.com/london/shangrila/meetings-events/cultural-calendar/.

With The Adulterous Citizen in tow, Doshi’s global island-hopping took her from Britain to Singapore for the South Asia Literary Salon on July 11. The Institute of South Asian Studies and the National University of Singapore organized the meeting on “Modernity, Identity and Belonging.” Doshi spoke on “Resistance of a poet: What can art do to shape society.” She was one of 12 authors and intellectuals from Sri Lanka, India, Pakistan, Bangladesh, Singapore, and the USA that participated in the salon.

“At HNP we like the idea that the Singapore trip could be seen as an Asian leg of the new book signing tour,” said Sample. But the globe-trotting Doshi was probably scheduled for the literary salon before the book launch that kicked off an earnest island-hopping halfway around the world for The Adulterous Citizen. Tishani Doshi is set to appear at the Chandigarh Literary Festival in November.

Doshi’s earlier work has already been called “invigorating” in a UK Guardian review. In India the stellar author is also known for herencounter at age 26 with the legendary choreographer Chandralekha, which led to an unexpected career in dance. In fact, “Tishani Doshi brings to the written page the precision, poise and sensuality of an accomplished dancer, which is also what she is,” said Aarhus University professor and novelist Tabish Khair about The Adulterous Citizen.

The Adulterous Citizen – poems stories essays by Tishani Doshi is available at Amazon.com, SPDbooks.org, and other bookstores.

More about Tishani Doshi for the Caribbean and the Americas

Tishani Doshi was born in Madras, India, in 1975. She received her master’s in writing from Johns Hopkins University and worked in London in advertising before returning to India in 2001.

In 2006, Doshi’s Countries of the Body won the UK’s Forward Poetry Prize for best first collection. She is the winner of the All-India Poetry Competition.

Doshi’s first novel, The Pleasure Seekers, was published to critical acclaim in 2010 and has been translated into several languages. It was long-listed for the Orange Prize and the International IMPAC Dublin Literary Award and short-listed for the Hindu Literary Prize. Her articles have appeared in the Guardian, International Herald Tribune, The Hindu, The Weekend Financial Times, Vogue, Elle, and The New York Times.

Doshi said she always wanted a selection of her poems, fictions, and essays published in one volume. The Adulterous Citizen is her first such collection, featuring new work, previously published texts, and updated versions of earlier material. Tishani Doshi is thought to be the first important author from India published in the Caribbean.