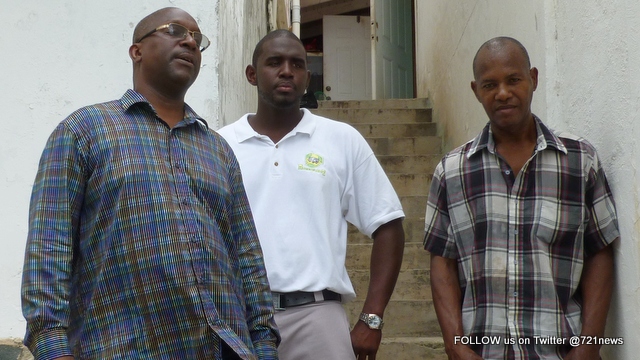 Gumbs lives in a one bedroom section of his home with his son.  Hurricane Gonzalo in October 2014 ripped off the roof of his home and it remains in the same condition as it was the after Gonzalo had passed about 10 months ago.

Gumbs seems to be suffering from the onset of Parkinson’s disease, but this still has to be confirmed by medical tests. It is a progressive disorder of the nervous system that affects movement.  It develops gradually, sometimes starting with a barely noticeable tremor in just one hand.  The disorder also causes stiffness or slowing of movement.

Although Parkinson’s disease can’t be cured, medications may markedly improve ones symptoms.

“I visited Vincent Gumbs and was saddened by the state of his living conditions.  Due to his illness, he is not able to focus on cleaning up and repairing his home.  As a community spirited person, I am working with a number of persons and stakeholders to help Gumbs.

“I would like to thank Meadowlands NV Derek Fleming, Operations Supervisor, who will clean up the yard and surrounding area of Gumbs home.  All debris will be removed.

“Another good corporate citizen of the community who has pledged his support is contractor Tallisin NV.  They will rebuild the roof of the house so Gumbs will no longer have to share a room with his son, but will have the living space that he once had before.

“Mr Gumbs has had it very difficult during the past months with Parkinson’s disease taking a hold on him.  He has even slept in his car a couple of times.

“I would like to thank the SZV Ms. Vanincia Walters who is assisting the health care aspect and Peggy Ann Richardson who is helping with medical and social assistance.  Both ladies have been extremely helpful in providing advice and what steps need to be taken to ensure that Gumbs gets the necessary help and assistance that he needs.

“I would also like to thank the Gumbs family physician who has also been instrumental where it concerns the various tests that are needed in order for Gumbs to be sent abroad for further medical care.

“Our communities need to get back to basics.  Neighbours need to start looking out for each other.  Give a helping hand here and there.  I don’t see the community spirit anymore like we use to have when I was growing up as a young man.

“We need to get back to basics and bring our communities together.  We need our community councils to get more involved and take the lead.  I think this would be a good start to get the ball rolling.

“In conclusion, I would like to thank Oral Gibbes for bringing the situation of Gumbs to my attention. Gumbs acted as a big brother to many in his community and was always there for us and now its time for we to be there for him and that is what we are now doing.  This is just one case of many within our communities.  Let’s help our neighbours who are in need,” UP MP Maurice Lake said on Wednesday.