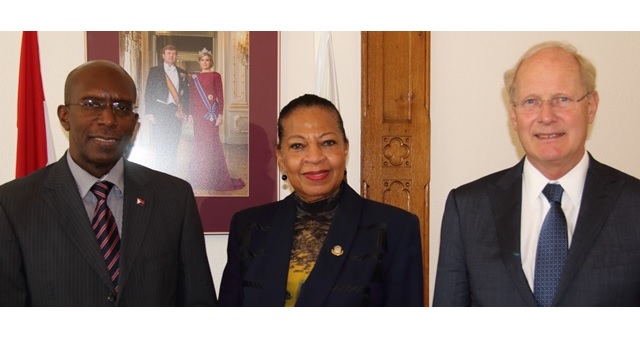 PHILIPSBURG, Sint Maarten – Minister Plenipotentiary, Hon. Josianne Fleming–Artsen received a courtesy visit at the Sint House in The Hague, the Netherlands from Franklyn Richards Theo Bot, both members of the Council for Law Enforcement.

The ultimate objective is to provide recommendations to the Ministers of Justice of the three countries of the Dutch Kingdom in order to correct shortcomings.

The Council consists of three members who are appointed by Royal Decree and represent respectively Curacao, the Netherlands for the BES islands and Sint Maarten.

The Council has a secretariat with offices in Sint Maarten, Curacao and Bonaire. The Secretariat of the Council for Law Enforcement in St. Maarten is located in the Joeliva Building, Charles Voges Street 7 in Philipsburg.