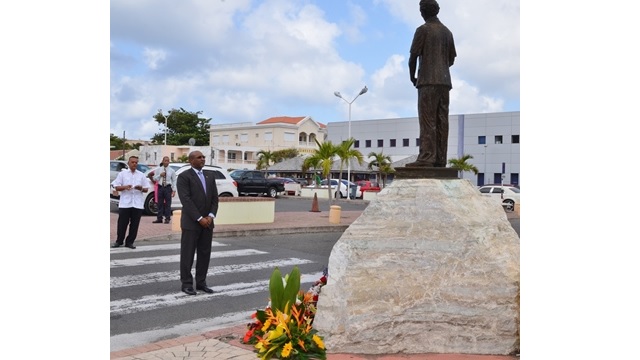 PHILIPSBURG – Minister of Tourism, Economic Affairs, Transport & Telecommunications Hon. Claret Connor, on behalf of the Council of Ministers, Friday, July 24th 2015, laid a wreath at the statue of Dr. A.C. Wathey in front of the Government Administration Building in commemoration of his 89th birthday.

Wreaths were also placed at the statue by representatives of the Wathey family, the United People’s (UP) party, Democratic Party (DP), A.C. Wathey Foundation, and the University of St. Martin (USM).

PHOTO CUTLINE: Minister Hon. Claret Connor after laying a wreath in front of the statue of Dr. A.C. Wathey on behalf of the Council of Ministers. DCOMM Photo