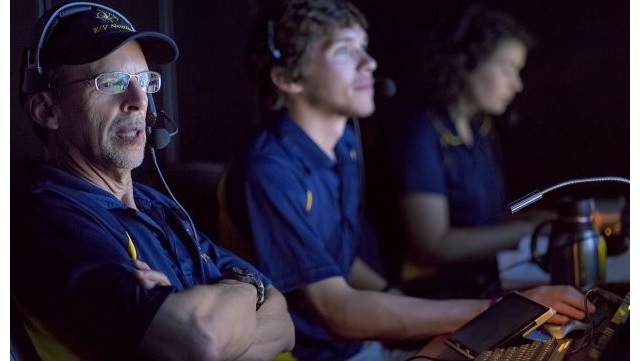 On Thursday July 23, reports were received that Kick ’em Jenny, the shallow undersea volcano the team of E/V Nautilus explored in both the 2013 and 2014 seasons, had begun or was nearing an eruption event. For more on the story, we sat down for a Q&A with Nautilus Chief Scientist and University of Rhode Island Professor of Oceanography, Steve Carey.

Dr. Carey, what Is your background, in the field broadly and also with this volcano, Kick ‘Em Jenny?

I got my undergraduate degree from the University of Massachusetts in Geology, and then I came to the Graduate School of Oceanography (URI) in 1975 and got my PhD in 1982 in Geological Oceanography. I specialized in explosive volcanism both on land and in the ocean. I did my thesis work in the West Indies on a number of volcanic islands in the Lesser Antilles arc. I was first exposed to Kick ‘em Jenny when we did a survey of the volcano in the late ‘70s. More recently, we had a cruise there in 2003. The last eruption of the volcano was in 2001, and our cruise was there in 2003 on the Ron Brown which is a NOAA ship. We did ROV work and sampling. We returned to Kick ‘em Jenny in 2013 on the E/V Nautilus and did a complete bathymetric survey of the volcano and collected a lot of samples using the remotely operated vehicle, Hercules. Then we returned again a year later in 2014, again with the Nautilus and did another bathymetric survey of the volcano, looking for any changes that might have occurred during the one year period, and took a lot more samples with Hercules. At that point, in 2014, we were kind of expecting an eruption. The volcanohas erupted about once every ten years on average. It was thus a bit overdue then, so I’m not surprised that Kick ‘em Jenny is becoming active again now, one year after the last time we were there.

A multibeam sonar map of Kick ’em Jenny created by the Nautilus team in 2013. Depth profiles are in meters.

When you and other scientists try to predict eruptions, are you looking mostly at the eruption history, or are there other factors?

It depends on the volcano. Some have much more sophisticated monitoring techniques. They look at gas discharge, deformation, and seismicity. At Kick ‘em Jenny, the major technique that is used to determine whether the volcano is becoming active again is earthquake monitoring. There are a number of seismometers located on different islands off the coast of Grenada which can be used to locate earthquakes whose sources are at Kick ‘em Jenny. Typically when it becomes active again, the number of earthquakes increase. One of the interesting facts is that there is a very distinctive kind seismic signal that is given off when the volcano is actually erupting, and it seems like the volcano is starting to give some of these signals. My colleague at the University of the West Indies, mentioned that the Seismic Research Center has put a request in for all pilots in the area who are flying over the volcano to look for any evidence of discoloration in the water or any turbulent action on the water’s surface to confirm when an eruption occurs. So there’s been no confirmation of an eruption yet, but it’s been giving all the signals that it is very close to erupting.

Was that the primary motivation for the elevation of the volcano’s status level from yellow to orange, these eruption signatures?

Yes, plus the number of other types of earthquakes in the area increased rather dramatically. Apparently there were some earthquakes that were even felt on the northern coast of Grenada.

You mentioned asking pilots to look for signs of volcanic activity. What sort of activity might they see. What is the range of possibilities we can expect?

There is a range. Since Kick ‘em Jenny was first discovered in the 1930’s, the eruptions have occurred about once every decade, and they vary in style. The most energetic eruptions have broken the surface and ejected pieces of magma and gas into the air, probably not very high, several hundred meters or so. The other kind of event would be that it actually doesn’t breach the surface but you see some discolored water on the surface, a rusty color, and maybe some gas bubbles coming to the surface. The third kind of eruption is when the earthquake signal indicates that there was an eruption but there was nothing detected on the surface. Those are the three kinds of scenarios that we are likely to see if it becomes active again now.

In those scenarios you describe where there is not much impact on the surface, what does that look like in the water column?

There is probably some low level discharge of magma and some gases that form a heated convective plume and carry very fine grained material that has a different color. That reaches the surface and spreads out. It just produces something like a slick on the surface. It would be visible, but it wouldn’t have any major effect.

Are there any positive aspects to an event like this? Does this kind of eruption allow for any additional opportunities for scientific observation?

We don’t understand the behavior of some of these shallow water volcanoes very well. Any time we get an opportunity to make measurements about how they behave, or what kind of signals are given off before the eruption, that’s obviously useful information for monitoring the volcano in the future and being able to better predict when it might become active, and when it might be a dangerous eruption or one that is not particularly dangerous.

Of all the eruption possibilities you mentioned, tsunamis were not part of any of them. We’ve seen a few references to those kinds of events in the coverage on Jenny so far. Is a tsunami possible or likely from this volcano?

In general, based on its recent activities, the threat of tsunamis is very low. The summit of the volcano is around 200 meters down. The kinds of tsunamis you can get generated by shallow water explosions are just really not a big threat here because the depth of the top of the volcano. In all of the eruptions that have occurred since the 1930’s, there has not been a destructive tsunami generated by the eruptions of Kick ‘em Jenny. I anticipate that the situation would be the same moving forward.

What aspects of this volcano stand out to you? What brought you back to it so many times?

One of the interesting aspects of Kick ‘em Jenny, and one of the reasons we have been there studying it over the past couple years is because it has what is called a hydrothermal system. Inside the crater, seawater is circulating down into the volcano, and is then discharged into the crater as high temperature fluids. There are mineral deposits that are being produced inside the crater as well. These submarine volcanoes are the potential future sites for mineral deposits that form by these volcanic processes.

Are there communities of life supported by that hydrothermal activity such as the chemosynthetic organisms of the Galapagos hydrothermal vents ?

At Kick ‘em Jenny, we did not see the usual kind of chemosynthetic organisms, or at least the big chemosynthetic communities that you see at mid-ocean ridge spreading centers with the giant tube worms and giant clams. The only things we saw at Kick ‘Em Jenny were some shrimp that were typically associated with high temperature waters. I think one of the reasons we don’t see the other types of chemosynthetic communities is because the hydrothermal system at Kick ‘Em Jenny is basically destroyed every ten years by eruptions. You don’t have the opportunities for establishing long-lived communities there because the volcano is so active. In addition the chemistry and temperature of the hydrothermal waters at Kick’em Jenny are quite different from the black smokers found in other geological environments.